The up-and-down-ness continues. I've felt like deleting everything of mine on the Internet, that I'm making myself way more vulnerable to my own paranoia than receiving satisfaction from sharing and friendship. I know I expose too much, far more than warranted by therapeutic benefits.

I found this photo cropped and my name deleted and used in this blog post and spent about 13 hours on the roller-coaster. After some search I found his email address and asked to delete the pic, (after weighing it against asking credit/link for the pic,) which he did, but without a hint of apology, and that he bothered to crop my name out said a lot. I learned that, to me, theft of photos on the Internet is not about the photos, because unlike the theft of, say, a camera, I don't loose access to my photos. It's more about the blatant defiance of protocol; I felt like this man walked into my house, with his shoos on, walking around leaving dirt on the carpet, lifting our stuff and generally defiling our private space.

And so far this blog has been hit the worst; not so much, that I have discovered, Flickr or Facebook. so I thought of limiting the audience of this blog, but it got to be too complicated. A clean sweep would suit me better.  (I'll give you a warning if I decide on a wipe out.)

Then I receive a little present like this, don't I? I feel all fuzzy and warm. And the pleasure far outweighs the fear. 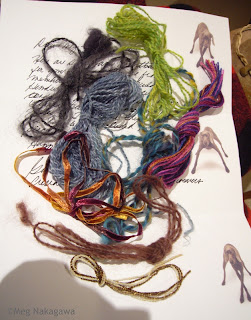