Garden Blitz Day 9, yesterday, was the first "full" gardening day. Although I dithered in the morning and we didn't get out until 11.30, we put in nearly five hours in the sun and wind and finally began pruning taller trees and some of the ivy.

As I said, summer arrived Saturday afternoon. Though we have wind, it's not the horrible gusty blustery kind, but a nice sea breeze and it doesn't go on all day. Afternoons are headache-inducing bright, and when still the bugs come out; my allergy meds aren't coping, so we best to start early and come in for late lunch.

GBD10, today, I got up late and dithered so we didn't go out until 10.30 but we still put in three hours, and created some visual impact. We also had procedural disagreement so I sulked and weeded another part; Ben said he didn't hear me, and though I know he doesn't lie, I don't believe him. 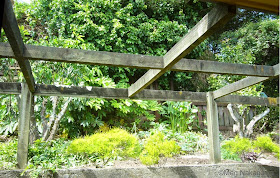 This is the view from my kitchen sink. Ben thinned a tall camellia to the right by about one-third; you can see the top of it and the Dwayne's tree. The sorry-looking lemon was pruned several times over the last three years by me; this used to be roughly twice as tall and three times as wide and we could only collect the few lemons at the bottom and got no sun on the patio; this tree is expected to come back to life next autumn/winter, but if not we'll still keep it for the foliage but will keep it small. The grapefruit that is not grapefruit but great citrus for juicing and marmalade was pruned by Ben. The ivy is one meter deep in front of the retaining wall. You can see I love my purple hellebores where they are because I can look up into the flowers. I'm going to move the fragrant yellow shrubs, (relative of Erica? These grow up to be over a meter,) so I can see the hellebores better. The path between the yellow shrubs and the hellebores/heucheras is where we have some of the the worst weedy vine problems. 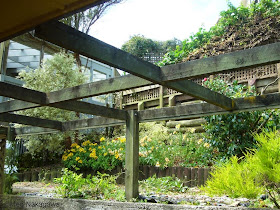 To the left you see, or don't see, Ben having successfully removed some of the ivy, plus the now-one-third-as-tall, pale "lemon" tree, (it's called that but not citrus-related,) closer to the corner of our property; it's the same kind as the one closer to us. We hadn't seen the sky from our kitchen in possibly half a dozen years and we were taken aback by how wonderful it is. We may take down the red akeake, (you see the trunk,) because it's a little top heavy and doesn't do much other than to drop leaves on to Neil's carport roof.

Everything we pruned were spread on the bare parts of the slope; it looks messy but by the end of the summer we can stomp, flatten, and leave to mulch. The not-as-thriving back half of the alstroemeria patch was decimated in the process, but I put in two sachets of seeds every autumn anyway, and with the increased sun, it should look alright next summer. I'm putting in sunflower seeds tomorrow. And the short camellia I pruned by about two-thirds.

This small area, about 1/5 of our property, is going to require another two days to clear; this may be the only area we'll get to blitz this holiday, and we haven't done anything inside the house. Still, this is where we can see from the house so it will have been worth it.