*** Some characters in this post or on the linked pages may not appear correctly if you are not setup to view Japanese/Kanji characters.  Apologies for that. ***

This database hosts claim this it's not a comprehensive/definitive one, but based on observations on crests used at funerals, (indeed the last and only place most regular folks use family crests.) Based on that, Ben is pretty sure our Nakagawa crest is the overlapping eagle feathers, second row, far left. My Dad's, from what Dad described many years ago, (either far left or middle here,) doesn't appear on the list of Mitsuhashi crests.

Mom's family, The Yonedas, uses the chrysanthemum flower, and that's the one I'm most familiar with because in our region parents used to give daughters items with birth family crests as wedding gifts. I don't see it on their list, but from memory it was something like the far left on either the first or second row on the chrysanthemum list. It's been 25 years since my grandfather passed away; it's been a while since I last saw it.

Since the imperial family uses mums, Ben was surprised commoners could use the mums as well.  But then he said after the war, unless you were an eldest son, you could pick out anything you liked so Grandpa might have done that. That's what Ben thought his dad did, too. At any rate, unless your family came from the aristocratic, samurai, or wealthy merchant stock, (where I can imagine ordering a craftsman to design a significant symbol, usually with plant motifs,) chances are at some point an ancestor picked one he liked and we descendants got stuck with it, almost the same as our family names.  (So many of our family names are geographical descriptions; mountain-rice paddy, small island, forest, tall tree...)

When we got married, I had a play with designing our symbol, if not quite a quest.  My maiden name is Mitsuhashi, or "there bridges", and Nakagawa means "middle river".  In Kanji, the right column is Mitsuhashi, and the left, Nakagawa. 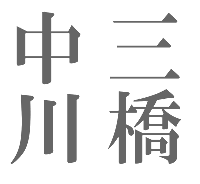 You can see that not only the meanings of our names but the characters for three (三) and river (川) can easily be combined, and in fact I did use three vertical and three horizontal lines as my mark when I used to paint ceramics for fun.  When I needed a logo for my weaving, these instant warps and wefts were a no-brainer and I played around for days trying to make up a stylish logo, but they looked a bit artless for my taste at the time when I was more interested in creating curves and complicated shapes on the loom.  When I'm a little older, I might go back to this idea, of flowing warps and wefts delicately interlacing, perhaps in elegant grays.