I haven't received my hardcopy pics yet; Amanda said she'd mail them to me on the weekend.  We had some misunderstanding about "posting", so I'm very appreciative she uploaded some on her blog and I can get started.  And reading posts by some who have started work, I've been anxious, a little bit, in the last 24 hours, to get started.  So I downloaded three photos from her post, (sorry, kitty,) and started playing a little bit.

When I was five, I vaguely thought Grand Canyon was "thataway", and I realize now I meant southeast of Tucson, Tucson being a smidgen to the right of Satuaro in this map.  I knew the National Park crossed a state border, and whenever I thought of a state border, I thought of the Arizona/New Mexico border, for no particular reason. What can I say, I was a kid. 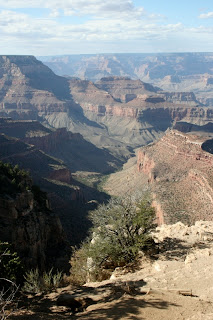 This is Amanda's picture. 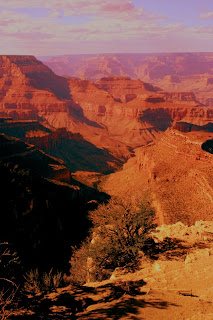 In my mind, though, Grand Canyon (and a lot of Arizona,) was salmon pink/orange, (a touch paler than the picture above,) except at sunset when it turned a darker, deeper orange, and then purple.  Above is a composite of the images I have in my mind. As well, Ben has digitized some slides Dad took in 1963/64, which have discolored to this kind of pale shade of old.  (I will dig up some of the slides before P2P2 is over.)  It's hard to separate what I actually remember vs. what I rediscovered in 1976 vs. what I think I learned from reading and photographs.

Back in those days, Dad told me The Grand Canyon was a natural phenomenon, and explained how water can, over millions and millions of years, cut through rocks and "the ground" to gouge such a vast "groove".  I had to look down really hard to see the river at the bottom, which was just a glimmer a mile down.  He also told me because it's natural, the Canyon looks different at different parts of the park, (I can't remember the details,) and we saw some picture in a pamphlet (??) and we agreed we liked the deep, dark, rocky parts better. 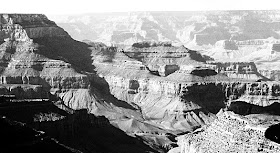 As regards this picture, the colors in my memory are at the forefront of my thoughts now, but I intend to look into the value contrast as well as the horizontal and vertical lines and the fan shapes. 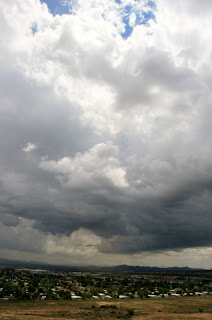 The Monsoon pic: above is the original. 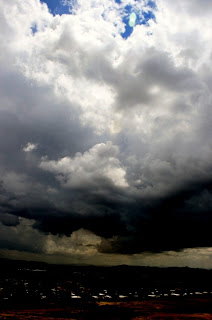 I love cloud and sky pics, but I couldn't feel the three-dimensionality/depth of the clouds, so I manipulated it.  To you the clouds in the two pictures may appear similar, and I wonder if has to do with the very strong contrast Nelson sun often creates, but the bottom picture feels familiar, and realistic, to me.  Having done this, I really like the hues at the bottom - burnt orange, dirty gold, and indigo - though it makes this, to me, not-a-very-Arizona scene, and my loyalty is divided between the top 60% and the bottom 40% of the picture. 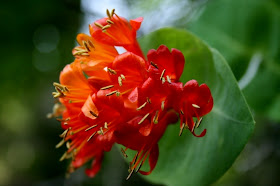 Lastly, the Honeysuckle.  Here is the original. 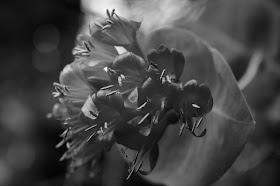 I have a hard time getting past the lovely orange in sharp focus, and the cool yellow-green in the background, and for sure I'll work with them, but I know there is more.  One thing at the tip of my brain, as it were, is the different degrees of how sharp the focus is, though I can't think of how to investigate this at the moment.
Meg at 5/28/2011 01:08:00 PM
Share