Finding the Saddle and Some Thick Skin

Was I in a funk! It was the first time I seriously thought of quitting weaving altogether. I didn't want to think about weaving and didn't go anywhere near looms or yarns, in life or online.

Instead, I was happy to go outside, except we had some rain, another cold spell, (not as big a problem as I waited until afternoons when the frost was gone,) and severe-weather-warming gale winds, which weren't as bad as forecast but was no gardening weather.

I had a secret ambition to spend as many hours gardening in the first half of this year as I did all last year, but May and June weather made that difficult; I couldn't even do 100 hours. Oh, well.

Instead, I read. Fiction. And a lot of websites where writers wrote about writing, and listened to author interviews on Radio NZ and NPR. The book itself was not fabulous, 6.5 out of 10?, a farce about a fictional writers' festival. Now I'm reading another by the same author about writing workshops. I thought of putting in serious effort in fiction writing again, but I still remember why I chose weaving over writing fifteen years ago, and most days I sat and looked out the window waiting for the wind to stop.

Meanwhile, I found interesting what Woodson said about a writer-ly way of reading, as I most definitely am a follow-the-plot reader most days. I also contemplated reading the same book multiple times. The last I did this was with Viviano's  "Blood Washes Blood", which started out as a man's search for his ancestors but turned into Gariboldi and the start of Sicilian mafia. If I were to read a book for a second time from my adulthood, (as I reread and re-reread books in childhood,) I'd start with "The Scarlet Letter" because the first time I followed the rather unpleasant story and still noticed the magical writing.

Thursday would have been the first day I could have gardened, but I went into town to talk to Andrea and show her the pieces I had trouble with. I ended up leaving most at the Suter, because I observed her and a volunteer's reaction and comments. I never bought into it's-handweaving-imperfection-gives-character school of thought; technique has to be as good as I can make it, though that's never been my strong suit. But I decided to try out another perspective. And some thick skin.

It doesn't mean I'll stop experimenting/practicing to improve techniques, but  I want to see what I make more holistically, (is that the right word?). I'm not justifying bad techniques, but trying to think/see outside my familiar/comfort zone.

Weavers will be horrified; I may need to handmade a balaclava.

I also met with Jean for coffee that day, and she asked me what my project/s were for the next little while. I said it's stash reduction, and explained it's not the speed or quantity troubling me, but the back-to-front way of designing/planning. Since Alison told us in 2002 not to look at the yarns on hand first and base our designs on them, I've followed her instructions. Working backwards feels foreign, especially when working with some of Mom's yarns I would never have bought, but this is half a step outside my comfort zone. Shouldn't be a big deal after some practice.

Thursday night I felt excited about weaving again, but Friday morning was more like seeing an old friend with whom I had a big fight. Slowly, instead of white or undyed plain silk I went looking for, I picked a salmon pink silk bouclé weft, and I got back on the saddle. In the first 32 picks, three warp ends broke, (two in the 32nd pick,) and I braced myself for another challenging afternoon but the rest of the 500-32 wove smoothly. Today another 400 picks went without a hitch, and I even started planning/preparing the next few projects while I wove. 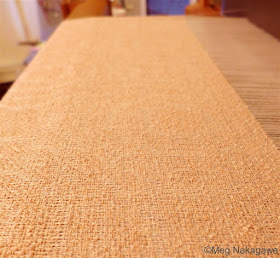 The weft is more pink than orange or brown. I can hardly see the pattern as I weave, but it's a modified version of the second one here. It's thin and delicate but I'm curious to see how it washes. I think I'll call this, "Twin Set and Pearls".
Meg at 7/04/2015 10:49:00 PM
Share