I felt so energetic while in Japan and immediately after I came home, so I assumed that will go on for a while. Well, not long enough; I had a kind of a blah week, maybe two; not crashing after the trip, but just blah.

I amazed myself how smoothly I could pick up where I left off in either place immediately; the Japan part was understandable as I was on a mission with a tight schedule and had started thinking/planning before I left, but to describe this last home coming "smooth-landing" is way too dramatic. Ben and I were right back where we left off as if I was away for an afternoon while he was at work; as if I can travel between my two worlds on an hour's train ride. This is new to me. It'd be nice if it took that little time/money to go back and forth, though; my body/mind hate the long flights more than my wallet.

(Oh, did you just hear the screeching seagulls? I like them. Not nice as far as bird songs go, but one of the best reminders I live a cushy life by the sea.)

I've also been looking for a small project, things I can do little bits of every day culminating in something I'd enjoy looking back on, but not being a finisher nor "a little bit every day" type, I decided not to think up anything new but to try to resurrect some I'm still fond of enough not to have thrown out. I've been thinking of about a dozen of these I worked on a good deal, and another half a dozen I for which I collected materials, mostly collage, in attractive museum shop bags, but haven't had the gumption to look at any and pick one. I'll show you if/when I start, or better yet finish. But I'm trying not to get over-enthused to declare something I'll regret, like, "I'll finish one project a month for the rest of the year!"

The garden is horrible. We've had many cool, overcast days in between bright, hot days, but I can't be bothered going out yet, and I've got to combat a pretty bad white fly epidemic too boot; weekly garlic spray may have suppressed them, temporarily but for months, but I have to move on to "chemicals" this year. Doesn't help that I now know 400 hours of hard labor ain't gonna do much good Chez Moi, but that's my problem. 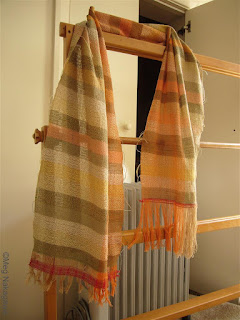 On to weaving. I avoided weaving the piece on the loom because I found it unattractive, but you know, in order to get on to the next piece I had to finish this, and it doesn't look bad off the loom. It has more cool colors than I remembered, and I can think of a good Japanese adjective to describe how it looks to me, but it's one of those that just doesn't translate; it's like a combination of cool/pretty/detached without cruel/snobby. And of course I know it's going to have a fabulous texture.

I played with the treadling some more, (the first piece was the top treadling with a couple of interruptions,) planning to mix it up in the second piece, but even after culling, printout big enough so I can read the treadling ended up seven pages on A4 sheets, and the ones I saved looked similar to each other.

So far on the second piece I've used the third, (not counting the one you can see just a tiny bit of,) from the bottom, but I hope to insert other treadling in places.

Weft colors include blues I didn't sample, but I wanted to use only 26/2 100% cashmere so color choices were reduced. So far it's going in a regimented blue-to-pink, blue-to-pink order but the number of picks vary. To compensate for even more cool colors than the first piece, I plan to make the two pink areas larger than the others, and to insert other colors, perhaps 20/2 100%.

For now my plan is to weave the fourth or fifth draft from the bottom in these 20/2 colors, but we'll see how it goes.

The seven treading variations starting with second-from-the-top are all simple back and forth (pointed) treadling in different numbers and I enjoyed how the paler left half changes; this might come in handy some day.
Meg at 3/25/2016 03:13:00 PM
Share