I'm still in a mental coma, but that is not to say I'm not scheming...

1) As soon as I boarded my return flight 11 days ago, I've had in mind another needlepoint project, so this piece has been sitting in the middle of the living room floor and I am looking at it all the time. I'll stick to colors around rusty yellows because I like them and I learned how to match them in pleasing and disruptive ways. Although I'd still like a bigger piece to hang inside my front door, I'll do another biggish sample to experiment more.

2) There is a new pattern emerging, and that is, the last few times I've returned from Japan, whether I sought them or not, I come home super interested in making prints; woodcut and lino in particular, because they don't require a press and suit the naive look I like. I brought back a few postcard-size wood and lino, super keen to get stuck in, but had no idea what of, so I vaguely thought perhaps repeats of shuttles, inspired by thin Japanese cotton "towels" that often use everyday motifs.

Just as well, too, because after two, (or was it three?) cancelled workshops, (although she kept teaching small groups in her studio,) Judith has taken on a multi-year contract to teach art on the Cook Islands! All the very best to her, but my guys will have to be put on hold.

3) I had to keep reminding myself to draw while in Japan; it's still not a natural activity to me, not in the way needlepoint is, and I run out of patience very quickly. But I had a couple of good experiences. 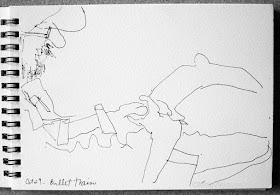 On the bullet train down south, Ben sat on the window seat, me in the middle, mom on the isle seat with the best chance to see Mt Fuji. I was so close to Ben I couldn't figure out how to fit as much of him on a postcard-sized page for a long time. This was my first attempt. 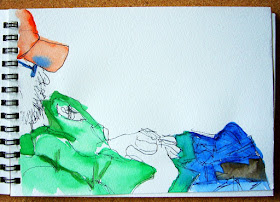 This was my second, with colors added later. This makes more sense, with his big camera bag between his knees, nodding off after a very early morning, but I like the first much better. 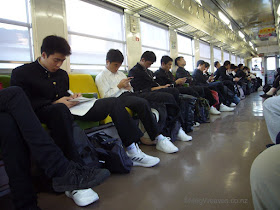 This pic of lovely high school boys was taken on a slow, tiny local train down south.

It was much later I thought to draw them, and though I worked quickly, all too soon they got off and in came co-ed school students, who were visually not interesting. (Sorry, very white pages, pale pencil lines; the pic was manipulated as much as I could, but...)

I also did some travel journal collages, including in my seat on the bullet train, (I am kicking myself for not photographing that,) but I have to wait to finish it as I posted it by sea mail. This one started out well, but I've gave into my compulsion to paste everything, maps, whole pamphlets and even small posters, so the journal lost the curated feel, and spaces to write/draw. I've run out of pages anyway so I've made a simple one of the same size and will combine the two at the end. I also hope to have some handwritten elements, including Best Meal, (we had so much good sashimi and sushi,) and the list of exhibitions.

I'm also doing a tiny bit of Letter Journaling again; they're the perfect vehicle to keep dipping in and out of designing, color experiments, and visual problem solving; unlike solo projects, I need to post them on, so I do get things done, pretty or otherwise.

4) Ben bought one and I bought two cotton T-shirts for me to tie-dye. I'm thrilled about the project but am not sure what kind of designs I want.

With regards to weaving, I haven't had any compelling ideas or projects but:

1) I'd like to finish the achromatic warp, and the current three-weft project in particular. I've been working on it for too long.

2) There is that red Syrie warp, and the need to make space for the tapestry loom. There is also another double-with commission, so I must prioritize wisely.

3) I want to do a few warps in cotton, with a focus on colors.

4) I keep telling myself I am interested in double weave as a design tool. :-D Also, in dyeing.