I went to a three-day screen print workshop with Judith. It's my third time, but the first two were in '02 and '04 and this was the first I attended that included printing on paper. (This is why I wanted to go!)

I wanted to do something loose and manual/analog, so I dug into my gesture drawing. I seem to fall in love all over again with the Friday home time drawings in Feb, '12. Finally these two pages had to come off the sketchbook so I can scan. (Apologies for the bad pics, it didn't rain today but was dark all afternoon.) 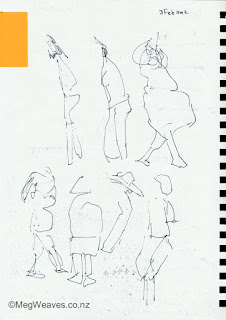 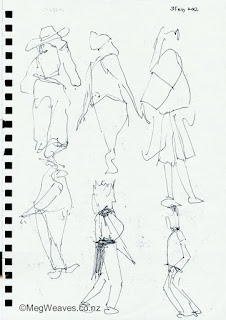 Based on the four best, I prepared four screens, and also prepared some sheets with acrylic wash. (Note to self: I must practice wash to make them more attractive.) 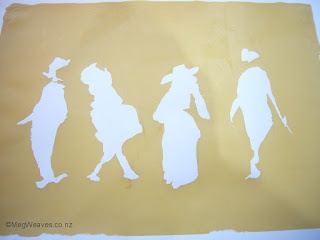 Background (We'll call this B): first layer; wax resist was applied to the part of the screen where the four figures would be printed. Unfortunately I had too little space between the screen frame and the print area, and the tape I used to define the print area was icky, so none of the test prints printed nicely, which turned out to be a good thing. 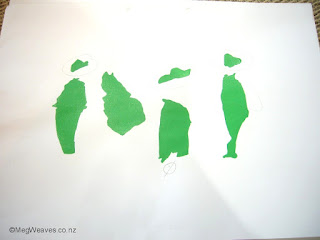 Stencil 1 (S1): second layer; this "stencil" was printed on to emulsion and exposed like photograph using a mylar as a negative. When the screen is washed, the emulsion on the unexposed part, (clothes, hats,) washed off. 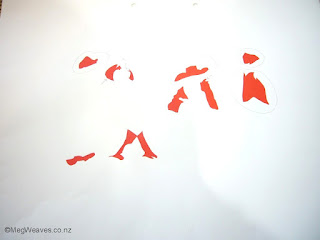 Stencil 2 (S2): third layer; I cut out some clothes, hats and shoes from an architect's film. The film is then taped to a screen with no prepared design. 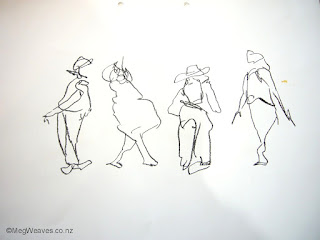 Pencil Line (P): top layer; the photographic or keyline technique mentioned in S1 is really for these fine, nuanced lines, drawings/designs and photographs. I was thinking of a more manual method for the outline, but Judith and Kath, a classmate with lots of experience, both convinced me I'd be happier with photographic method which maintains the pencil lines faithfully. I'm glad I followed their advice.

Throughout the preparation I was mindful I didn't want the different layers to go on top of each other precisely, so I varied the shapes in B, S1 and S2 slightly. None match each other or fit precisely inside P. There was an element of working this blind, (without test prints,) but I'm happy with the results. 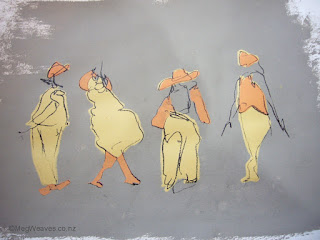 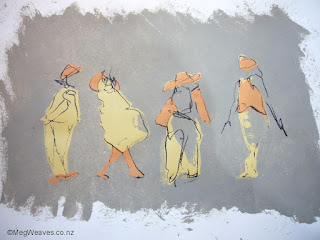 Same as above but S1 did not print evenly and I love it. 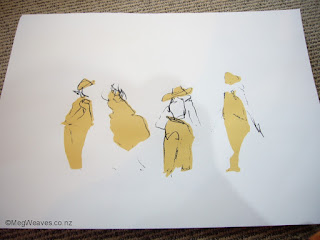 S1 and P with P going on faintly. I could paint this in and finish if I like. 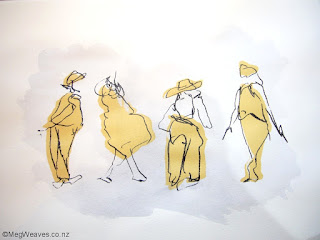 Acrylic wash, S1, P; unlike the one above, two layers printed evenly. 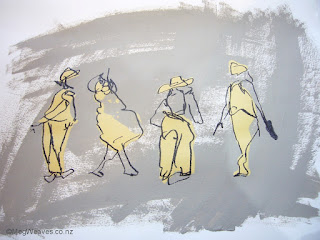 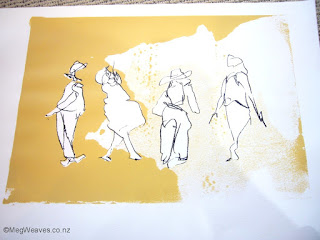 Very bad job of B, then P. My fav; the background is very varied and interesting from the middle to the right. 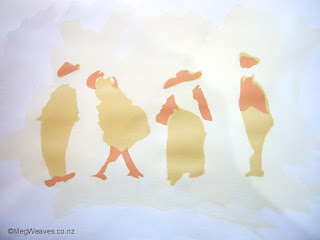 Acrylic wash, S1, S2. I could try to draw the outline, but I see P as the finishing touch and prefer to print it.

By masking areas, I could have used multiple colors for clothes and accessories using the two stencil screen, but I was short of time. I also didn't meant to print as many as I did, but Judith kept telling me to push down harder so I don't get the "orange skin" effect, (apparently undesirable, but I actually love it; it suits the clothes, hats and shoes; might try to shoot with Ben's camera,) so I kept printing. I so wonder if it has to do with my cheap acrylic paints, too.

Too often I sacrifice making colors I like for expediency, and regret later. This weekend I paid attention and took time to mix carefully, another reason why I don't have many colors on the prints. But I love my colors.

I first met Judith sometime between '00 and '02 when she ran a mixed media drawing workshop in the days when there weren't mixed media "products", so she introduced us to what are now seen as traditional material, but how to use them together, and to use everyday items in innovative ways to manipulate them. Many of which I still use in my mixed medias but can also be used as backgrounds for prints. I love that my various interests are converging.

Judith is such a terrific teacher at the completion of the first workshop I was compelled to write to the polytech congratulating them for having such an employee. I went to my first screen print workshop only because that was her next evening workshop and never imagined I'd enjoy it this many years later. I'm tempted to invest in a small setup (A4? Smaller?) for paper printing when I get back from Japan, but for now I hope Judith will continue to hold these workshops, which are more like retreats where equipment/material and her knowledge are available, but we do more or less our own things. Because, among other things, I have so many half-done sheets!

Tuesday to Thursday last week I was so worried I wouldn't be well enough for the workshop I took drastic measures. I started the day with a litter of very thick  grated ginger/turmeric/galangal/honey/lime or lemon/pepper hot drink, then soaked in a hot bath, and went back to bed until lunch time. Wednesday I added hot, diluted ginger wine to the mix, hoping the alcohol might kill germs. By Thursday I was desperate and dipped into Ben's single molt throughout the day and stayed in bed longer. (I remembered about this friend who is very healthy but when she gets a cold she hunkers down with a large bottle of Scotch!)

I wondered if I should not go to the workshop at all, but I had planned and prepared so I decided to leave early if I didn't feel great. Well, there is no time to feel sick in Judith's workshop, the mind keeps churning out ideas! I did leave about half an hour early on Day 1 to buy paint because I was completely out of reds and blues, but otherwise I was all in, then a fair bit of Scotch every night.

I haven't worked on the needlepoint for a while, but I undid Rosie's scarf Option 1 a week ago Sunday and started on Option 2. I love the new color and proportion, but it doesn't have the heavenly soft feel, but it's good start. I can make her another later. I'll show you a picture in the near future, but I knitted a little last night.
Posted by Meg at 7/23/2018 06:06:00 PM