Last Friday afternoon I got sick of not tidying/decluttering in spite of good intentions each morning, so I went in and tidied art supplies. There was nothing to cull, except almost all collage material, (I find myself holding on to art supplies in the event my body gets too old to weave,) but I reorganized them in different boxes. Overall volume didn't decrease as I imagined. Sad face.

On Monday I continued with fabric and unsold work; all dye experiment swatches went out, but not much else. I wasn't concerned with "completed" things, but again I held on to raw material with which I could experiment and maybe make things. But that was the end of tidying for the whole week. I now have only books and bookshelves to face, but boy, it's a biggie. And in all this tidying, I can't find the two little packets of dye I bought a few weeks ago. LOL face.

Rosie saw some of the cable knitting I've been posting on Facebook and I offered to make her a tube scarf. Grays are the only cashmere I have plenty of, but she likes brown, and you know me and browns! I dug up browns I have, and found one beautiful darkish brown, mom's handspun, that would look delicious in cable but feels not exactly feather-soft; a few balls of devastatingly lovely Australian merino I dyed with Blenheim walnut husks/shells but there may not be enough of, (yeah, ending a clause with a preposition!); and some of Mom's handspun cashmere and mixes of which there is definitely not enough. Because Blenheim is a meaningful place for Rosie, I started with that. 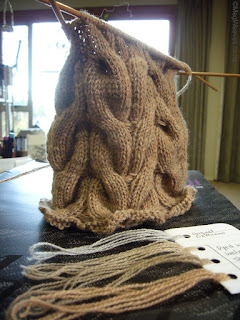 Except three lovely colors mixed together came out a murky... old-man's-undershirt color, so there is a chance I might overdye this once done. As well, I quickly learned there is no way I have enough to get a descent length in tube form, but for some reason I have kept going. I might change my mind later, or just make a very short tube scarf. We shall see! 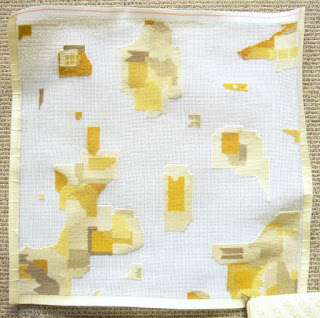 Needlepoint is progressing, sometimes quite fast and sometimes not at all. Some days I've completely lost the plot and just keep filling space, but weirdly I am enjoying not knowing what it's going to look like in the end. I need to get heaps more yarns but I think I'd like to stay with these 12 colors, (11 really, because I don't like one at all,) unless I can find one or two more very light colors that fit the scheme.

I had an interesting conversation with a young jewelry maker Tom about making. We agreed on a whole lot, but I look forward to pick his brains again; he has strong art education background and is now rebelling and turned to craft. My takeaway, though, is it's OK that I don't feel guilty not weaving at the moment; I can't sell and I am interested in making really lovely things, so I'll wait until I have a splendid idea or a gushing enthusiasm, whichever comes first.

We're six and a half months into this year, and I've had a cold for three and a half of it. My airplane ear is better but not gone, and my system is still congested. Last weekend I woke up breathing through my nose and what a strange sensation that was; my brain felt drafty and cold! I'm back to new-normal mouth-breathing, again. Can't even tell if it's good or bad. I found out both coughing-endlessly and congestion-induced-ear-infection colds have both been going around Nelson; folks have had or know folks who have had them. But so far it's just me with both.

Ben works in IT; his office has half a dozen people squished into not that big of a space; it's fully air-conditioned; it's been cold this winter; and he and colleagues don't open the window every so often for ventilation. And some of his colleagues have small children. So, the perfect germ incubator. I'm off meds, ready to get off "temporary" supplements, ready to reclaim life. But it's going to take a little while longer, maybe one more visit to the doctor. Grrrr, I'm so ready to move on.

What have you been making?