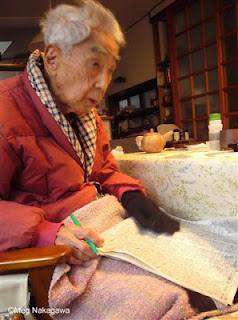 Not sure about the details as Sis and Bro didn't make it in time, Mom may have, but she's now resting.
He got to see my sister's boys on his second last day;boys who have grown so busy
Dad rarely got to see them in recent years. These two, especially the oldest, changed Dad's life.
On Dad's last day, Mom clipped his fingernails, shaved him, and asked if he wanted a barber's visit,
but he was asleep before he answered.

This photo was taken on my last day at home in March. He's watching the high school baseball games while marking the newspaper TV column looking for samurai dramas and docos I might like,
for him to record and send to me, instead of talking or just watching the games with me.
Typical.
But then neither of us would have known what to say if we had to talk.
Posted by Meg at 5/06/2013 10:38:00 AM 18 comments:

I wasn't just sitting by the phone all this time; I also sat on the loom bench, and the towel warp is done. I'm not too impressed with the quality of the pieces, though while weaving, things went swimmingly. Some thoughts:

1) I enjoyed weaving white. It may even have been the first time I wove true white. The hills and valleys of threads appearing on the loom was wonderful to watch; on dark rainy days it really lit up the whole room. Even if I may not want to produce a whole lot of white things, they can be used for dye/shibori projects, and weaving with whites made the prospective ideas come to life. (This is a color photo!) 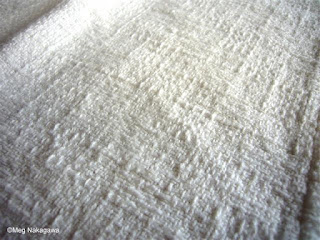 But my fav is gray on white. This is l~o~v~e~l-y. Sorry for the bad weather, this, too, is a color photo. 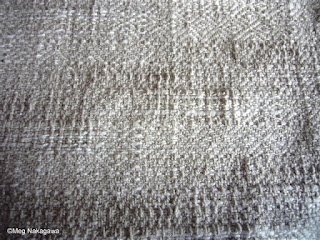 Same wee piece, but with a little too much nonexistent hue.The weft is a soft, medium gray, so the truth is somewhere in between. 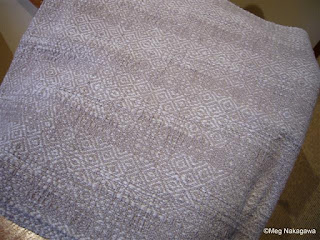 2) I like using towels I make, and may go on to weave bigger ones. The dust from cotton and cottolin is a bother, but I can plan these projects for times of the year when my nose won't be as bothered.

3) Drafts. I enjoyed trying out a small variety of similar drafts in different colors, which was part of what I wanted to do with these experiments. Normally, especially with cotton scarves, I prefer drafts in which patterns/shapes/colors bleed/blend into other areas; ones where shapes are not on a grid, e.g:

But where I used more saturated wefts, and eventually in any combination, I liked simple grid drafts, too, like these: 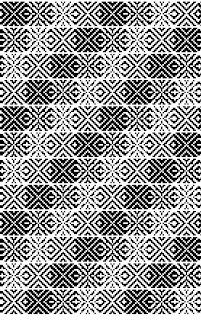 The next on the loom looked absolutely hideous but I went ahead to see what happens, and I'm glad I did because it was surprising in that it'd suit pieces where I want more distinct, clear designs, in large pieces. I was hoping to try this in 2/20 cotton at 42EPI, and when I get home I still will. 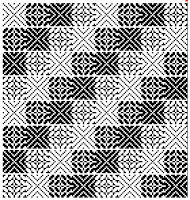 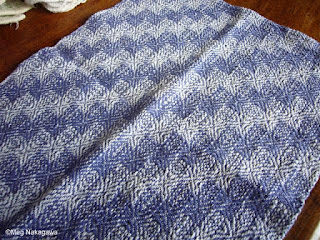 So, once again, hooray to sampling.

Lastly I wove four identical samples for Mom and her students to show varieties in 4-end twills, based on this draft: 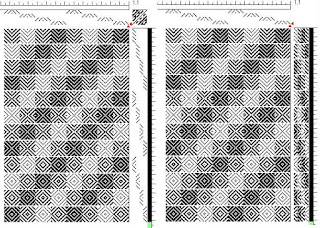 A Week is a Long Time

In politics and family crisis. I need to record this because if I don't, I wont' believe it later.

Ben thinks I'm on an emotional roller coaster, and I may be, but not because I'm upset about Dad, but because my best intentions and associated plans have been changing daily and that upsets me.

Or he might be going to the other hospital directly.

On that Thursday, after ascertaining Mom was not going to put Dad in a care facility temporarily but bring him home for a while, I started packing with late May/early June departure in mind.

On Friday, I asked my travel agent to book me a flight the week after Ben's week off, told Sister and Brother the May dates I'm likely to return, but I didn't tell Mom when we spoke.

On Saturday I started doing things on my lists. I spoke to Mom but just noted her plans and schedule, and didn't tell her. The other hospital may have been completely off the cards.

Last Sunday, I asked what Mom thought of my coming home in late May. The answer, in my words, was there is so many new factors in caring for a bed-ridden person in a five-level house with new/strange assistants as well as the old, she needed to sit down and plan and be the manager, not Helper No 1, and to do this she'd like a bit of peace, not my sister and me bombarding her with well-intended but constant noise.

Usually when I'm home I try to take over the housework, telling her it's a temporary reprieve and she should do whatever she likes. I noticed this upset her balance in life in Feb/Mar compared to previous visits, so I was going to butt out and be one of the helpers from next time, but I decided to give her more space.

On Monday I updated the travel agent, asking him to not book anything but be prepared for an urgent request. I also unpacked, but kept the suitcase in my stash room.

On Tuesday, after talking to Mom, possibly after the other hospital was back on the cards, I still thought late May/early June would be right, and started looking forward to Ben's week off and started to work/live as normally as possible.

On Wednesday, after Skyping with Mom, possibly after the other hospital was off the cards again, I thought sometime in June would do, and I started planning my next work project.

On Thursday, I started to think that the trip could possibly wait until late Aug/early Sept, giving me time to tidy the garden as a therapy; I started planning things to do with Ben during his week off (among others, the new Star Treck movie,) and even contacted Pat about having lunch next week.

On Friday, after Skyping with an irate Mom, who was told "the other hospital" was on the cards again, and her declaring Dad is coming home and giving the docs, nurses, and the public help organizations specific requests to that end, I revised my plan to June 4 departure, June 3 being a holiday here. But Ben and I made plans for his week off, including cheese-making, gardening and tidying the house a bit and throwing things away big time. I even made a gantt chart.

On Saturday, my sister's family and Mom went to see Dad and shortly after Sis asked to Skype ASAP and told me later in May may be too late. And nothing in our almost-20-years in New Zealand had been urgent on my family's side, so I rang my travel agent at home.

Long story short, I'm leaving early next week but not tomorrow; our problem is always the domestic leg, and I think Tim's doing something special but I won't know until Monday morning so I can leave on Tuesday rather than Wednesday. I'm packed, and I've also packed Ben's case in case he needs to follow me soon.

As regards Dad, it's still the sieve/multiple organ failure situation, with the addition of a possible pneumonia. His main, heart, dog is an indecisive man, according to Mom. But to me it feels as though his body is finally catching up with him; he's been so angry about his failing health and a lot more disheartened by his condition that his condition warranted. That's why the docs and nurses encouraged him to do stuff, and as recently as Friday, according to the heart doc, his heart/lungs were not threatening his life. But Mom and Sis have noticed an even more drastic decline in his mood, and you know I wouldn't be surprised if the body just decided to go along.

Of course nobody wants him to die, but if he does, nobody in the family will be as devastated as you might expect because the mental/emotional place he's been for the last six months was really very bad and if he's freed from it, well, we can't complain.