Nearly two months since the last post? I had thought it's been half as long. I've been un/productive, un/motivated, and un/inspired, so, start with a list?

1) I withdrew everything from The Suter and Broomfileds in mid/late April. The pieces had been out and about long enough I was too embarrassed to go to either place. I had panned to put them online but haven't gotten around to taking new pics. Descriptions can stay the same, or not, but that niggly thing called pricing gets in the way. Vinegar bath, pressing, new tags and making calico bags, on the other hand, were lovely, finished within a week of the pieces coming home.

2) I have not rethreaded the cotton warp nor woven, primarily due to that 2006 fall "injuries" coming back big time; a few places on both legs have throbbed and kept me awake off and on since fall; it got so bad I went to see Doc Karl, who after a long consultation prescribed me a vid exercise. I fell, hurt myself, my muscles have been compensating in unnatural ways ever since, (which is what I told four health professionals in '14/'15 when it first came back,) so we'll see how it goes. I may have overdone this the first week, and/or it's this rather longish cold spell in Nelson, I've not been cured miraculously. I've been holding my breath for when I can sit down once again on the tiny folding "fishing" chair thing between the shafts and the back beam to rethread the cotton warp and weave the hellebore draft.

Having said that, the cold weather is great. I've had far fewer days, (well, almost none,) where I've felt completely blah, and I haven't needed a nap in a month and a half, so albeit it partially/temporarily broken, the old bod keeps going. 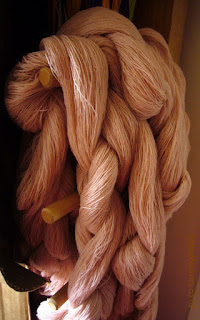 3) Looking for some weaving mojo, I made a peach/pink warp. Fine but worsted wool, not merino; I have loads of this yarn in about five colors because these were the skinniest wool I could find around here in the '90s. Nice, grown-up colors, but not soft texture. The plan is to combine with very fine merino possibly for fabrics to sew.

4) Not being able to sell is always a downer, as well as not having the kind of maker/gallery relationship I had with Jay Farnsworth at the old Red or Andrea Chandler at the Suter. I have to grow up and stand on my own, which I seem to have done better before I became so matey with the galleries. "I'm too old for this," doesn't cut it.

I remind myself the alternative is an office job, but I've been too old to hire for the last 15-20 years, so there's that. I also reprimand myself for taking Ben's income for granted and spending way beyond my means, but even that is falling on my own deaf ears. I have to tighten my bootstraps and change my big girl pants to a fresher, starched, just-pressed pair. And stop buying books.

5) I signed up for and went to a four-week memoir-writing course, and went to the first three sessions. I briefly enjoyed writing again, and the prospect of reconnecting with my writing friends. (I thought the last time I went to Joan's writing retreat was in 2009 but it could have been, shivers, 2008!) And as much as I like reading memoirs, knowing my life hasn't been as interesting or eventful as I'd like to read about bothered me because weekly we were asked why we want to write a memoir and what we hoped to achieve though our "books". The question remained, am I content to retell mundane stuff in a funny way, and the answer was/is yes, and I couldn't think of clever answers so I kept repeating myself every week.

Then there is the reason I was willing to give up writing in preference to weaving all those years ago: the prospect of never ending (for me) editing, where all my stories inevitably whittle down to a couple of sentences after taking out all the "unnecessary" bits, with nothing to show for a whole week's work. In contrast, you know, if I make a warp I have a warp whether I like it or not, and I can put it on the loom. If I have a warp on the loom, I can thread/sley, whether that is a good project or not, and, gee, when a warp is threaded and ready to go, the very least I could do is sample to my heart's content. Or revise plan. There is not this natural progression in writing that propels me to the next stage. I find that... dispiriting.

So, nah, didn't happen this time. But it was nice to read Joan's "So You Want to Write" and "Writing your Family History", and going through all the bits and pieces I wrote over the 24 years I've known her, throwing out about half, (yes, ceremoniously burning in the wood burner,) and typing in the other half onto this computer. That's something. 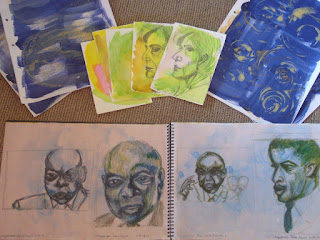 Meanwhile I noticed a complete change in my approach, to writing and with paper projects. As a kid, I used to be better at big pictures and the grand plan, but couldn't produce the details/parts. So for e.g. in writing a memoir, I might have a structure of a book in mind, with approximate number of chapters, their order, importance/length/balance by subject/period, what to say in the preface, the cover, etc. Nowadays I want to write the wee stories, let them pile up, and if a structure emerges organically, great, if not, keep writing. Same with the thing I do with paper that is not writing; doodle, paint, print, cut, fold, paste, whatever; make the parts and build something, a book, a collection, a bigger piece, or just keep making the parts. And I am more concerned with method/technique/material and worth/interest of the individual parts than the cohesion of the whole.

The incremental (?) processes of weaving could have something to do with this change in focus/preference, but you know, I don't feel compelled to find out; I enjoy the making. 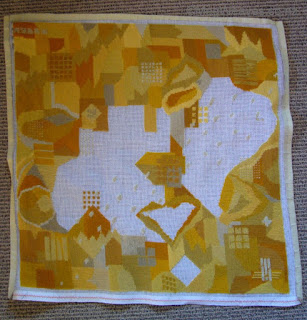 6) Needlepoint project came back into focus after I crossed the halfway point of my pension-related work and the abrupt end to the writing course. I am keen to finish it ASAP because I want to work on at least two knitting projects before the end of the winter. I've also gone outside to weed a bit; all this week I've wanted to go outside but it has been a particularly cold and therefore wet, (a couple of winters ago I fell twice in two days, the second day I fell on our concrete steps on the side of our house and hit my head against the metal railing,) so I worked on finish up projects inside. I've also been reading more printed books.

7) Oh, the three in today's title. One fellow student in the writing class approached me to say she had one from my India series, the predominantly green one at the bottom. She knew the story, about Dad passing; living with Mom for four months, weaving, reminiscing and fighting in the sweltering heat;  making the warp with Mom's cashmere while listening to her stories of her travels to India and looking/handling at all the textiles she brought back. And the knots, and how Santa Fe didn't want them but I sold all four in quick succession at the Suter. I told her how technically I should never have put cashmere though the ordeal, but it was adrenaline that pushed me to completion. Then Esther wrote to me out of the blue how she's been wearing hers all week. (Toldya, it's been cold for Nelson!)

This morning I woke up to an email that came via my website from someone whose name perhaps I should recognize, saying she has two of mine from the Suter and she'd like to buy me coffee! That's three in two-weeks-plus. So, enough feeling sorry for myself; it is time to get back on that loom bench. As soon as this old body agrees to cooperate again.
Posted by Meg at 6/29/2019 03:47:00 PM 2 comments: