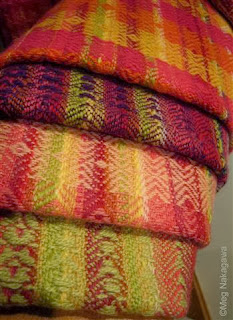 The four Not-Laharya pieces have been ready for new homes for a couple of weeks but I've been so uncertain about them they have just sat waiting. And probably got wrinkled in the moist weather.  Either all four are going to The Suter, OR, I'll take out the last short one, (second from the bottom in the pic) and take three. All I need to do is to write the blurb on the swing tags but I so don't feel like doing that; I'd rather make a new warp or weave.

Finding me so far down the rabbit hole of colors, Triona said, "Do mine, do mine," to which my first reaction was, "That's queue-jumping!" But the colors in her piece are pre-determined, i.e. the same as the fourth piece I submitted to Waiheke some years ago, so after a couple of moments, I knew she was right. So I made a short warp and started hers, but in the last Not-Laharya draft. 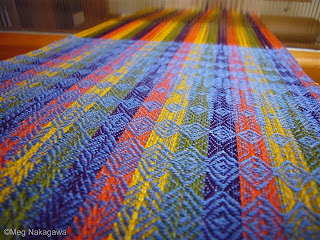 Except not identical to Waiheke #4; that had four colors in the warp, this one eight for interest. 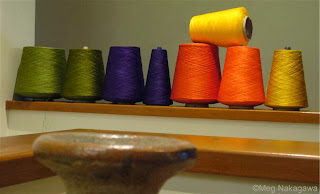 I thought I remembered everything about that warp project because those colors were a big challenge, a dare, to myself, but no, I had in mind the wrong blue weft. Notorious as I am with not keeping weaving records, I have small notebooks by my looms recording how long I've woven of the current piece,and in the only loom notebook I kept for reasons forgotten, after I checked to see if I kept any loom notebooks, I found this!!

I must have been nervous about the colors in this warp, eh. So, weft is in Marine, not Delft.

I went back to Ronette's drawing class after missing two weeks of something called monoprint. Because it was the third session for everybody else, she introduced a lot of new techniques, but it being the first time ever for me, I stuck to one method, of rolling out ink and scraping/rubbing some off. 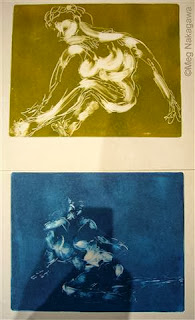 The top was the boldest and most interesting, I thought; I'm disappointed the scraped areas in the bottom one didn't come out clearer because as far as drawing goes, it wasn't bad, escept for the right breast being enormous from overzealous scraping. She was a new-to-me model with something of a Mattisse-esque rhythm to her poses.

There are two more monoprint sessions, which will be great fun and I don't know if I will stick to this technique or try something else. Ronette is just stunned drawing after drawing, (or print after print yesterday,) I manage to get the whole figure in. And these are smaller than A4.

We have a couch and some chairs in the hallway because the used-furniture man said he'd come to pick it up on Wed but it rained and rained on Wed and Thurs and I was not home yesterday. So it's been an interesting weekend trying not to bump our limbs while rushing through that maze but I refuse to have them back in the living room. I had a chance to catch up with Maria, in between the furniture in the hallway, on Wed and it was lovely. Such an inspiring soul. If I'm not mistaken it's the first time I saw her since we took down the exhibition 13 months ago. So looking forward to the next time.

Mom has been great; she's out with her friends so often it's hard for me to pin her down at home. Last week she stayed home one day to weave only because she felt guilty going out so often and not weaving; dear, oh, dear. She is turning out to be exactly the kind of widow I thought she'd be, and finding out a few of her friends have been widowed/widowered while she was busy caring for Dad. Meanwhile, I put all the yarns meant for Dad's ruana in a box and brought them back up to the stash room.
Posted by Meg at 11/30/2013 01:00:00 PM