Japan Debrief 3 of 3: That Cubism Thing - Long and No Weaving

One night I couldn't sleep worryied about this post; if I don't write this soon I'd forget everything.That was seven/eight weeks ago. But then sitting this long away from the madness of August, I can see something of the path I took. Keep in mind I am only reporting what happened, what I think I learned; nothing definitive about isms, let alone painting.Anything you can teach me, I'd greatly appreciate.

It all started with a flyer for a two-and-a-half hour course on collaging in the manner of Picasso and Matisse; innocent enough, right? I never forgot the time my brother was befuddled by my sister-in-law explaining the greatness of Picasso was in putting a 3D world on a 2D plane, so the class piqued my cutiousity.

But the session also turned out to be a taster for a fortnightly six-session course in which we could develop an idea into an actual painting. Mr Kanamori, ever so charming, asked me if I would be interested, and I was sure I was unsure about the painting part, but I was ever so intrigued after my first glimpse into Cubism. So I signed up, declaring to Mr K on Session 2 I only hoped to get an esquisse by the end of the term. I struggled and struggled but never came to any conclusion or closure, let alone an equisse! Still, it was an interesting experience and if I follow it up a bit more, I think this process can be a tool in my toolkit for, ummm... my drawing and all that stuff?

Apologies for the photo quality. Some of the pencil marks are so tentative, and it's a bit cloudy today.

Session 1: The taster session: the goal was to look at a coffee grinder form all angles and capture shapes from all perspectives; assemble them on a page and somehow make the whole look like a 3D coffee grinder. 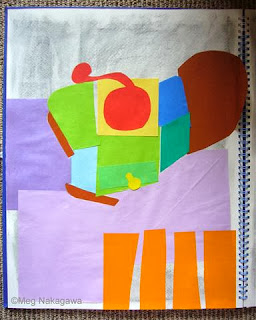 My first attempt: Mr K was pleased with the coffee grinder itself, but I needed to put it on a table surface and do something with the background or parts other than the coffee grinder, which in this case was the back of an imaginary chair. 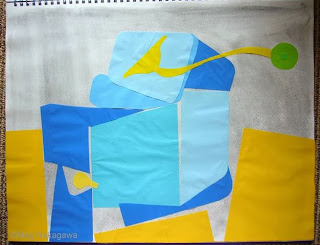 My second attempt: this time I paid attention the colors/values a bit more, and the fragmented table top, with which Mr K was pleased. At this point he made the mistake of thinking I had got it, and can complete a painting in the remaining five sessions. 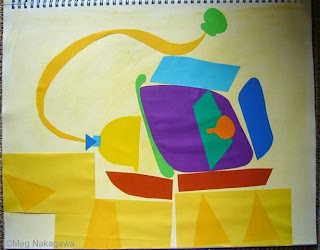 My third attempt: I took a few photos of the grinder and worked on a third version. I can't remember if I showed it to him, but I think it's quirky and fun, a bit of rhythm going.

In Session 2, I was assigned to work on this still life. 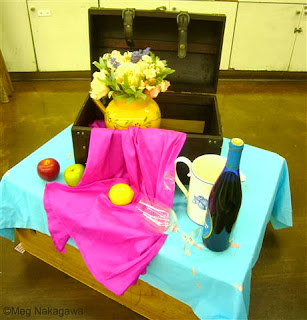 I took gazillion photos over the weeks, from different angles and close-ups, and went back and forth observing, sketching, drawing shapes and collaging. I heard Mr K tell someone else the point of collaging early on was so we don't have as much control over the cutting as we do with drawing, which I found to be true but difficult. As well, in this instance, a "realistic" 3D sketching was no help to me but more a distraction.

Sessions 2-4: below are some representative pages from my sketch book to illustrate my passage. (And this is where this post becomes more a record for me than interesting for you.) This is my first feeble attempt; I was more interested in the box than the objects, as it was similar to the coffee grinder, and was racking my brains as to what I was going to do with the flowers. 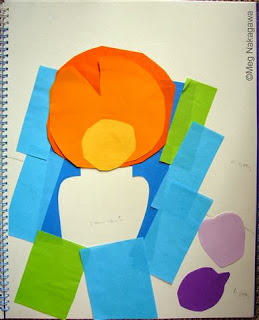 After some 3D sketches I started trying out ideas in proportionate thumbnails but ran out of steam.I felt I was only repeating myself. 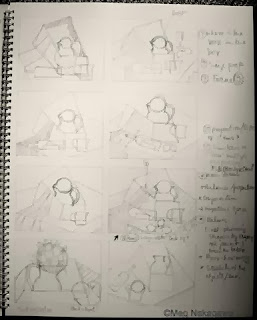 For those taking the course for a while, Mr K often refereed to the works of Braque and Juan Gris, so I looked up their work and tried copying similar objects. 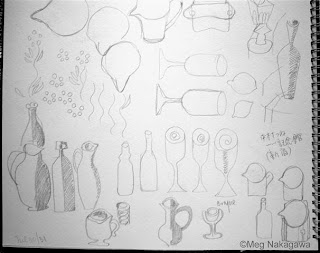 Having regained some steam, I trudged on. 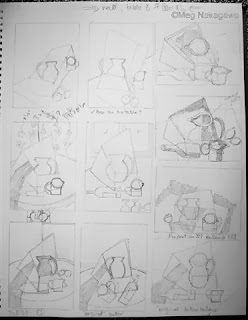 Discovering shading in the masters' works, I experimented with blocky, shapey shades, which turned out much too fussy and contrary to what Mr K wanted me to try, although he explained Cubism is very loose term and everybody within it tried their own thing so I may want to come back to it later. 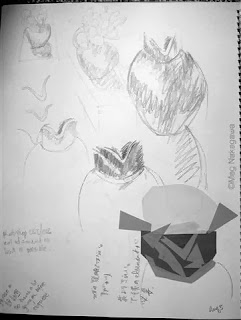 Sessions 3 and 4, I attended the class resolutely, but I wasn't having much fun, eh. And I think Mr K was giving me too many kinds of hints. 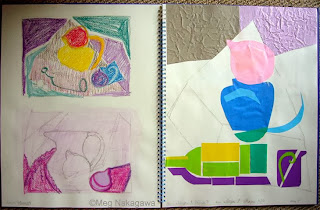 Still, you could say persistence paid and I started to see recurring shapes and preferences amongst my mess. 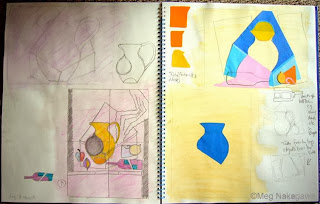 One of which was the smaller jug being inside the larger one making it the combination look like a profile of a cartoonish face. 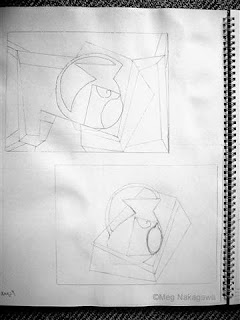 I still needed some variety of expressions, so I looked up Picasso and copied some of his objects. 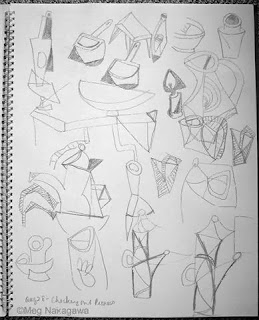 And tried combining them with the recurring shapes and the "face jug." The right page shows samples of what I was going to do in collage on a bigger scale, and before Session 5, I made some templates so I don't have to recreate the shapes and positions all the time. 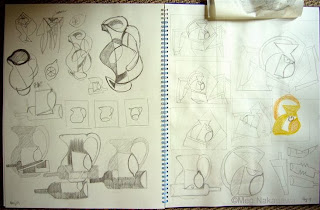 Templates and two collages I worked on during Session 5. Mr K didn't like my use of complementary colors and wanted more harmony, which I didn't mind. The problem was still the background; the blue example shows the table split in two and the objects sinking in the crack, as it were; the yellow example has the left and right halves of the table staggered, like to books piled up, so not as dramatic, but I wasn't happy with it. And then there was the problem of how I was to treat the wall, as I couldn't employ the usual perspective. I also realized I struggled with placements of multiple objects.

By this time I was able to pick out objects/elements I didn't like in my examples, and Mr K pointed out I don't like them because they are not simple color planes, i.e. I had made them 3D, but I didn't know how to fix them on my own. 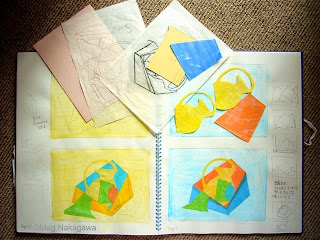 Although I extended my return flight so I could go the Session 6, I was too chicken to go back as I felt Mr K was somewhat exasperated by me, I was running out of steam, there was a typhoon coming, (I kid you not!) and I had to finish the photo-sorting for Mom. I emailed him, but never heard back, but I still consider this to have been a very lucky and beneficial encounter.

From the start I wanted to work on a face/portrait. I listened in on his conversation with another student working on one. When, not if, the spirit moves, I'm going to try deconstructing someone's face next.