I mended all the broken warp ends and fringed one and a half piece, (pieces?) yesterday while thinking about colors for the next project. I made the new warp specifically to tie onto the old, but the old warp was so fragile I took it off altogether. 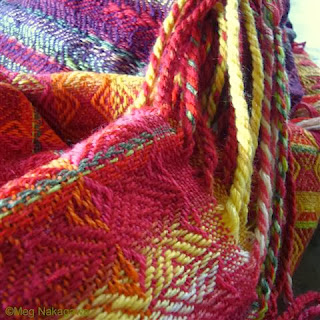 Pat came over on Friday and we talked about some of the things I've had on the living room floor. These are old Swedish yarns I've had forever, and I haven't been able to stop thinking about the two tealy greens and the sharp yellow since I came home. They're hard, so they are more suitable for hangy things rather than to wear, but one never knows... I have designs on the teals but so far only in my head.

(Yes, Ben and I have been walking in between the sets to get to/from the kitchen. The things I make him do!) 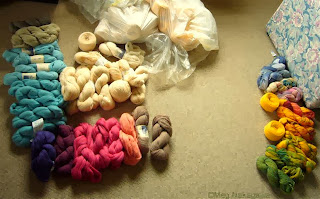 And then we actually sat on the floor in the basement and played some. 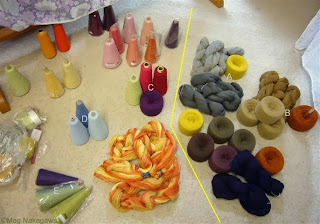 A and B are the kinds of combos I used to weave with, but I haven't done it for some time I'd "lost my touch," as it were and am finding it somewhat troubling. For the next warp, we tried to think of saturated combinations when Pat pointed out that I keep selecting complementary colors and I don't have to all the time. C is Pat's choice, D and E are what I had thought of.

In 2008 when Jill wrote to me with suggestions of how to make my weaving more edgy, an item on the list was to use complementary colors, and back then I felt they were uncomfortably discordant I tried my best. I guess I've become somewhat used to it I more or less reach for them naturally. Apparently. Jill's request is to weave "saturated" pieces, and subsequent discussion has got me confused about "saturated" and "complementary", but as far as colors are concerned mean "very", no? As in, very red, or (skip to the next paragraph if you're allergic to potty mouths,) don't be ha1f-@ssed about values/intensity? Anyway, so much more to learn. relearn, and try.

Then, "Dodo" from Kolkata asks me what's special about my colors, (to which all I can say is, not a lot except they are complex and bright for me,) and why don't I research Northeastern Indian textiles, which brings me to that puzzling and contentious issue of appropriation.

It's not a bad idea googling images of textiles from around the world, and I do that from time to time as you know, but in addition to finding colors difficult, I have a mental block about researching anything in too much depth. First there is the fear of copyrights infringement, and though I believe there's nothing much new in weaving and don't claim anything to be truly original, I am afraid of being influenced anything/anybody too much. And then there's the issue of cultural appropriation.

I don't know how it is where you live, but in New Zealand there exists a sometimes-severe vigilance surrounding cultural appropriation that I don't fully understand. Folks in art education are cautious and at one end of the spectrum, I've been advised not to claim to be influenced by anything other than this Japanese. I even hesitate to talk about this, (so much so I don't want to reread the linked post,) but of course it doesn't stop anyone from being inspired by anything. So my research into anything tends to stop at a very superficial level. Which suits my innate laziness just fine.