The needlepoint project has become all-consuming. It's as if I have a new puppy whom I can't leave alone; I keep popping back into if not staying entirely in the living room, looking at it, turning it around and running my hand over it. A puppy would smell better and is oh-so-much nicer to cuddle, but you get the idea. Two days this week I was all ready to tackle everything but the books in the stash room after breakfast, stopped to fill in just one tiny area, and wham, it's 4 in the afternoon!

I look at it more often and much longer than work on it. The time I spent on mixed media prepared me for this. In fact, the project feels like me putting down colors in yarns, although it takes much longer to paint, say, a 3cm2 area. 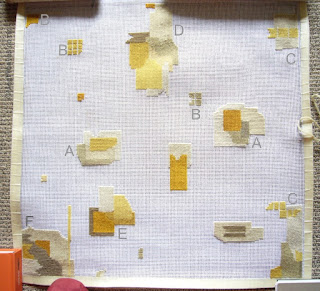 This was this morning. It looks a little different now, but I have a few problems. Which is why I changed this post's title from "Besotted". :-D

I like the appearance of patches marked A. I start with a darker, saturated "highlight" color, and make a rectangle with tiny bits "torn off". Then surround it with increasing less saturated colors so the appearance is similar to collage using paper with cut and torn edges, with the highlight "on top". I also like smaller, more saturated highlights like B, even though in areas C, the shapes were blurred due to lack of contrast with the colors around it. I'm not sure what's going on at C in bottom right.

D started with paler highlight colors, so surrounding with other colors didn't make the highlights stand out, and the area looks flat and uneven. This is a familiar "patchwork" look I make often in needlepoint. I'm at a loss as to what to do with D. E had the same problem but I added more saturated highlights which made it slightly better, but I worked some more here tonight, and it's looking as flat as D. (And the coloring is so 1970's!)

A more organic look in F feels more familiar, even though like A, it started with squares and rectangles with bits "torn off" but I didn't like the dark brown's shape and I kept adding. It's wee corner is attractive, but if I were to make something again/bigger, I need to learn the characteristics of different styles and plan the overall look better. 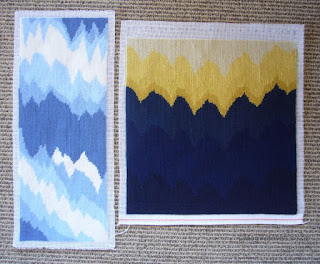 I also treated my past project a little more vigorously; not quite wet-finishing, but I left these in warm vinegar water for a while then rinsed a few times in warm water. The canvas is slightly softer, and the color yarns look ever so slightly "together". This finishing doesn't feel necessary, but when the current project is finished, I might try even hotter vinegar bath. I'm aiming for the more worn look, closer to the texture of a crossed stitched piece. 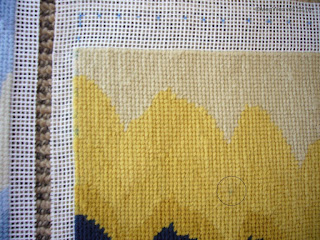 The big ooopsie was, I'd forgotten I used a run of the mill pen to mark my areas in one, and it bled. These are meant to be small bags, so the sides won't matter, I hope I can just adjust the bag width, but why on earth did I put that blotch in the yellow area, (inside the circle,) I don't know!

I've been spending some time on Sarah Swett's blog, trying to soak up the apparently relaxed attitude towards making. She doesn't speak too much about weaving her more "serious" tapestries, at least that I picked up, but most of her posts read like a mental retreat and is so pleasurable. I'm up to October of last year.

She reminded me that years ago I wanted to weave my own fabric for cross stitching; now I might weave needlepoint canvas with wool, although I might have culled some perfect yarns for this. :-D I've also been looking at my past drawings and abstract pieces for future needlepoint ideas.

It's not just the needlepoint taking up all my time. I've been spending/wasting quite a lot of time searching for weaving and needlepoint images on Pinterest. Quite a lot. While enjoyable, I keep telling myself, this is not the time to slack off; Japan trip is approaching quicker than I think. Goodness, it's July already, and I've been sick nearly three months this year with stupid colds. I must reprioritize. Soon.
Posted by Meg at 7/05/2018 10:30:00 PM