I've been gardening a lot, cooking a bit, reading while recuperating, and not weaving much. If I have a dressed floor loom I could weave in spurts, but since it's only the two table looms ready for me, I find it harder to sit down quietly after a morning, or longer, in the garden. But this is the very reason I haven't dressed the floor looms; I prefer to weave on them and I have projects I can only work on the table looms I want to get through.

Daylight savings started last weekend so that should alter my body clock slightly. Strange thing is, the week leading to the switch over, I kept waking up around six o'clock, extraordinarily early for me. Maybe working outside a lot has put my body more in sync with the changes of the season. It's still cold in the mornings, unusually for this time of year, but the direction and the brightness of the sun is decidedly spring, even summer, and hay fever is in full bloom. On the North Island and sunnier gardens around the country, flowers are in bloom. Chez moi, seeds are sprouting, seedlings are going into the ground. 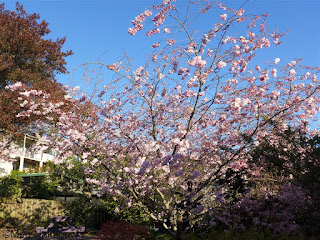 I can show you the cherry tree now; it's about 65% in flower. (Japanese start calling out at about 30% and follow how far a certain famous cherry tree or park or mountain is in flower. It's covered in the nightly news there.) And just as in Japan, the spring wind blows and rain comes down just as the flowers come out, but it's said that this extremely short season is why we Japanese love cherries. 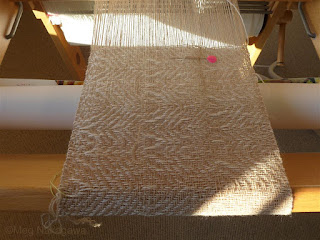 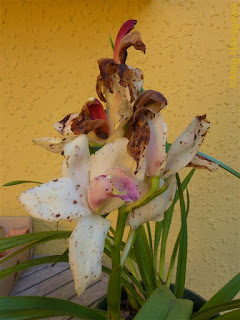 Today is my Dad's 88th birthday, a double-lucky number in Japan, and I assume China. In Japanese the 88th birthday is called "beiju", pronounced like "beige" but with a stronger vowel at the end, because 88 in Kanji look like "rice", in this case pronounced /bei/, and "ju" means celebration.

Dad was really looking forward to turning 88, (he died at 85.5,) and his former students were going to throw a big birthday party. Instead, he got two big and two small memorial gathering in two years; he'd be laughing at how it turned out.

It's strange how I miss him, how I don't remember any of his vulnerabilities, his fragility, and his temper; he had a fierce temper but it now feels as distant as something I read but not experienced. I miss him, but I'm now used to the fact he's not around. I'm not even taken aback when I want to ask him about chemistry, history, geography, politics, politics, and politics but I'm annoyed he's not there to answer me. But I still yell at the telly when politicians are being stupid and elicit Dad to do the same.
Posted by Meg at 9/28/2015 06:25:00 PM No comments: 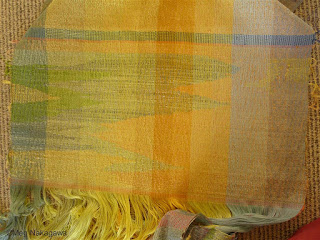 The sun came in through the window while I worked with tapestry technique on Wednesday, and the lovely gray-mix silk weft looked... green! I was so disappointed I stopped right there and then because I didn't want to waste an inch more of it. 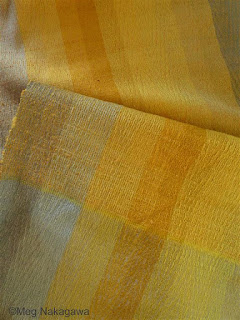 So I wove fabric. I used the peach and yellow silks I liked in the tapestry, plus a blue wool. Had I been able to calm down and select a different weft, I could have woven a "proper" piece, but I was worked up about the challenges of tapestry, and the aesthetic possibilities, and wanted to think as I wove. It was a process over product kind of an afternoon. Glad to have done it, glad-er it's done. 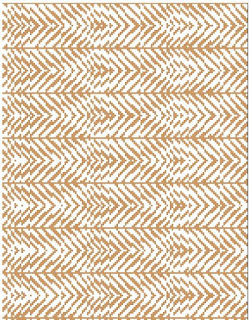 Next on the menu is the camel-colored cashmere mix on the Klik; I hope to weave a commission piece, a Thank you gift, and a merchandise. I am extra slow on a table loom, but I'm not compromising on the design. At this stage. Just yet. 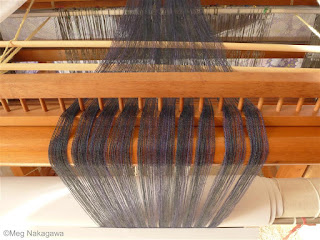 On the four-shaft I'm wound a purple-mix merino/mohair. This warp is short, for only one piece. I hope to weave a relatively straight-forward twill 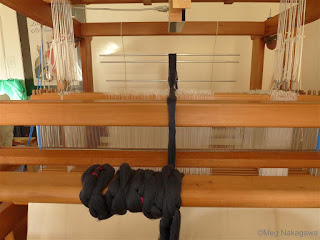 On the big loom I'm putting on the navy version of the mill-end gray I loved so much; I hope to weave two commission pieces and one more. Again, I have no idea about the draft yet but I liked how skinny silk wefts worked with this wool, so I'm thinking along those lines. 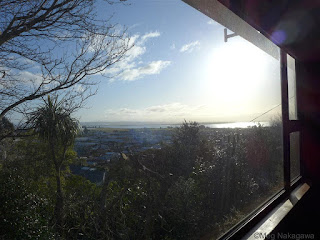 Our efforts in the garden have been slow, but we had a tree guy come and take out three and reduce most of our tall trees by about 2/3. Yup, many are about 1/3 of the previous height or density. Ben loves the view from the living room, office and, above, is from our bed. But me, I liked feeling as if I'm living inside trees, so, not so much. And our windows are dirty. But Ben's wanted trees trimmed for a good couple of years, so it was about time.

We now have space for two native Kowhais which tuis love. We have even been looking at what else can be taken out so we can replace with native-birds- or bee-friendly ones. Garden is certainly a process; I don't know if we'll ever see the end of it. I guess that's OK.
Posted by Meg at 9/07/2015 07:17:00 PM No comments:

As in, I want my current piece to be more interesting; as in, I find it boring the way it's progressing.

If you look at the second pic from the last post, the small piece I did in 2013, and the red bag I made from the same warp, you see that I make a lot of these fluid wedgy things when using tapestry techniques. It reminds me of the fog/mist often depicted in Heian-era picture scrolls, e.g. The Tale of Gengi; if you see a "big" picture, not details, of a palace and garden where there are a lot of characters doing lots of things, often the view is from above through thin clouds. Once I knew why this technique was in vogue but I can't remember now. Mist/fog and proper clouds are traditional Japanese motifs often seen in textiles and ceramics. (They look like flames when vertical, but they always show up horizontally on the loom so I think of them as mists.)

I've been gazing at Pat's tapestry book to get some ideas. Of course there are gazillion techniques but for now I can't be bothered reading and learning so I'm just gazing at shapes without clear lines. And I found some wonderful examples of tapestries that are similar to abstract paintings or collage. I wish I could show all three; if you happen to come in close proximity to "The Tapestry Handbook - An Illustrated Manual of Traditional Technique" by Carol K. Russel, they are:

An untitled abstract by Tricia Goldberg and Bonni Boren, 1987, (bottom of page 110). This could almost be a complicated, manipulated ink blots or finger painting in blues oranges, and browns. Very dynamic. (The colors on her website are much bluer than in the book. I wonder which is true.)

"Lyrical Landscape", by Trudi Eldridge, 1989, (bottom of page 57,) is in hot colors, the mood is an abstract, more childlike version of Gaugin's Tahiti. I see a volcano at night, with large horizontal areas of blacks and blue, with yellow and orange bursting.

And "1941-Baggage", by Silvia Ptak, 1987, (page 165) shows the original collage along with the tapestry. This looks more like an interior. Two of the collage pieces are photos but others are ripped pieces of colors, in pale pinks, grays and browns.

I want to make the current piece salable if possible, so I don't intend to get too adventurous, (sticking my fat fingers through alternate 2/60 cotton is too delicate an operation for practice,) but I think I'm going to try new shapes.

I was thinking back to the time I did the first small piece back in Japan. I struggled because I couldn't get the wefts to meet up conveniently and some areas always had more or thicker wefts so I had to do weave extra rows, but in retrospect I enjoyed it. It was nice to play without having to come up with a "finished" product. I know I don't do enough of these fun things, except in excessive sampling. The current piece is beaten not with a tapestry comb but with the reed and the wefts are roughly similar in sizes so the fell has been straight so far. To my jaw-dropping, butt-falling-off-loom-bench surprise. 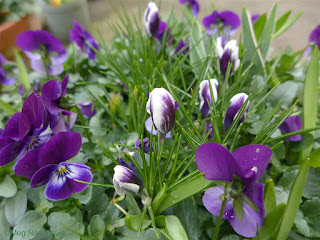 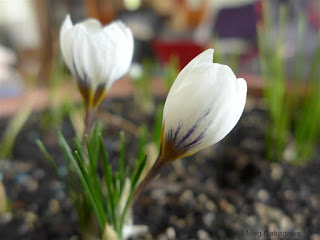 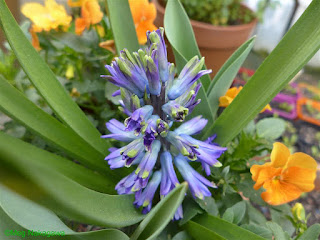 Obviously these are just a tiny, tiny bit of the best bits whereas the rest is wilderness. Although the temperatures are still low at times, the direction and the length of sunlight is definitely changing, and weeds and seed know this. Long-term forecast yesterday told us "real" spring is going to be slow in coming, but I'm more than OK with that. Except bugs and pollen are definitely out when I weed now. Today we have severe rain and wind warning again, but it's not so bad.
Posted by Meg at 9/01/2015 11:56:00 AM No comments: