I just spent more days than I care to remember in bed because of hay fever, possibly also the Australian bush fire smoke, partially due to bad prescription meds, And because I'm ill-disciplined, instead of reading books, making drafts, I gazed at drawings and dyed fabric on Pinterest some of the time, (not bad,) but read and listened to podcasts on Brexit and Impeachment, (bad!)  I changed my meds regime and quit the antihistamine on my own initiative, on the premise I can tell when something is bad for me, (the meds, not all the screen stuff, :-P,) so today at least I'm not walking into doors and pillars.

We've had rain which usually help, but during and in between we also have strong wind, so in terms of freewheeling particles, they cancel each other.

I've been dying to finish the elephant warp on the big loom, thread the Klik for the another blue blanket sample, and make a draft for an orange-to-yellow cashmere warp I put on an 8-shaft, but haven't been able to, because the antihistamine prevented me from sticking to a thought or operate my body in a more-or-less coordinated way.

Before it got so bad, I managed some dyeing with different degrees of success; you've seen these if we're FB friends. 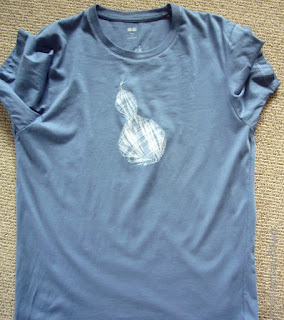 Ben's summer T-shirt; he wanted a Hyotan gourd shape. It was so out of the left field I had to practice drawing a hyotan several times. 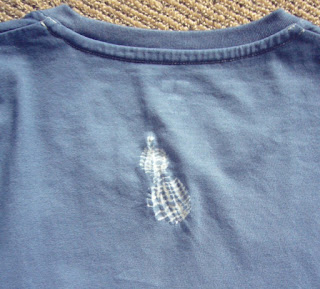 He wanted a smaller one on the back, but it looks more like a peanut. :-D 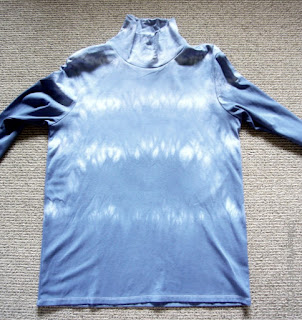 I did this in a new-to-me honeycomb method; easy in the first instance but tons of room for improvement. This winter-weight cotton top is thick, so when the fabric goes around the rope it doesn't go on as tightly as I like and there is greater space between the left-white parts. I wonder if I want to do another layer on this, and if so, what will I do? 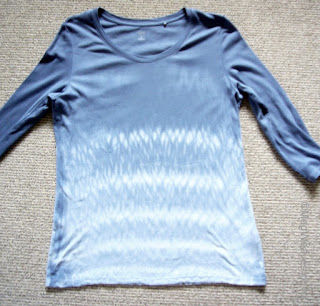 My summer-weight top, i.e. thinner fabric, goes around the rope more closely/tightly so the "stripes" are closer. I used the same sized rope for these two tops and the fabric below. 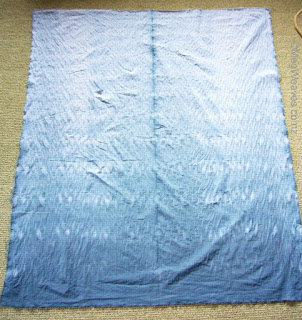 This thickish purple gingham cotton was wider than my rope's length, so I had to fold it in half. The dye shows up better in this photo than in real life! 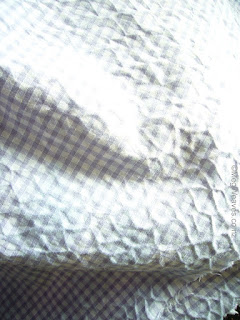 Though the dye pattern is too tentative for my liking, the shibori marks are beautifully present, which makes me wonder if I really want to do another layer of color and lose these. I didn't meddle with this photo; the weather/light has been this changeable for over a week; we even had hair on Sunday. :-D 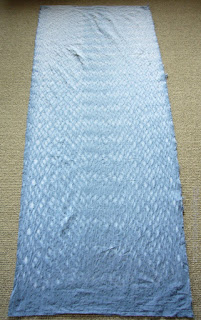 This is a thinner, narrower piece of cotton, wound around a skinnier rope than the three shown above. This is my favorite because of the busy bubbles, except the center where the bubbles line up too neatly. I've been wondering if I should twist the rope/the fabric to avoid this. Dianne, on the other hand, says, "Really like the contrast, boring otherwise," so there's that.

All four pieces were in the same dye bath but for different duration and agitation. After I took out all these pieces, I dropped this top to soak up as much color as was left in the dye bath. The horrible purple/pink blotches are less noticeable now, but when I have another blue/navy batch, it will go have another bath. I really regret having played with bleach, even though the top was already old and fading on the shoulder and back. It now needs mending around the cuffs and neck as well, and the thick cotton fabric is turning tough as old, scorched leather. 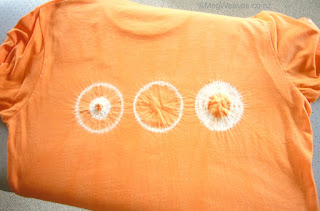 Ben's summer weight and the most successful piece has three circles on the back. (Don't ask me why on the back.) 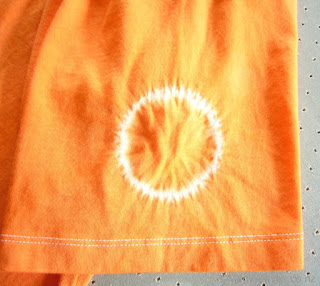 There is a smaller circle on the right sleeve. All three oroange shirts were in the same dye bath, but this for 35 minutes. 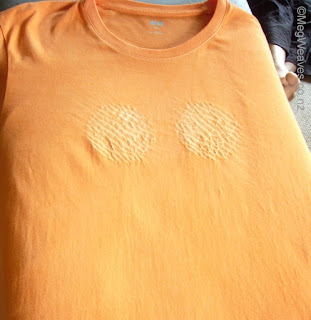 This was unfortunate. I had a circle of the same size in the middle when I dyed this yellow first, too dull and not showing off the circle as we'd hoped. (C. f. the leaves shirt below.) So I added two circles which were supposed to overlap. but the orange obliterated it, and now the shirt has a permanently stunned look. I am going to do another color on this, but I haven't figured out where to put the pattern, its/their size/s, and the color/intensity of the next color so as not to kill the yellow and orange completely, but make it look more interesting. Any advice appreciated!! This shirt sat in the dye bath for 20 minutes. 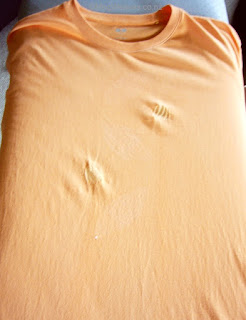 This was a calamity. Remember the lacking-in-contrast-yet-pleasing-shaped result below? 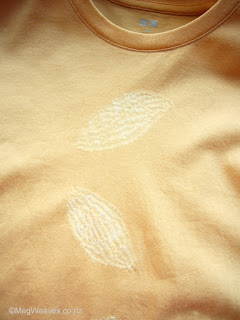 I found a tiny tear at the bottom of the bottom leaf, (not seen in this photo but seen as a white dot in the ruined version above;) I must have caught the fabric when I cut the tying threads but it didn't show up until Ben wore it and I washed it maybe three times. I mended the tiny tear and added two small circles just for fun, and stuck it in the dye bath for 10 minutes. I imagined the mending to blend in with the fabric, and perhaps two vague blobs floating around the leaves.

Neither happened. This one will absolutely have another layer or two, and I've been staring/glaring at it for hours for over a week but I have no idea how I'm going to go about it.

I've gotten fussier when I'm stitching/tying, but there's still a lot left for luck, and when I look at photos on Pinterest, I'm amazed how well-controlled and precise many of the designs are. Perhaps I practiced more with thin woven fabric rather than knit garments, my shapes might come out tidier?

In addition to these do-overs, I have one last white shirt for me, and one thick gray I ruined spilling bleach on one sleeve I want to rescue. I have two small packs of Dylon dyes which is what I have been using all along, but last week I dug into my old dye drawer and found tiny packs of sample colors suitable for cotton, so I hope to use some of those in due course. I also have this crazy idea of making baggy, for-home-only pants for Ben and me and dyeing them bigly and boldly, but I haven't told him yet.
Posted by Meg at 12/09/2019 06:54:00 PM 4 comments: