Heyho! I've been doing a bit of weaving, a bit of mixed media, a bit of gardening, but because I'm all over, expect no finished anything.

The temps are so that if we light the fire it gets too hot; without it it's chilly-ish. But unlike my family in Japan, (all three grew up in the same house where some winter mornings we could see our breaths, which the parents thought was character-building,) I don't panic just because it's chilly-ish; they blame it on my having spent a decade in Minnesota, but houses in Minnesota are centrally heated, so no, they are wimps. As I get older 15C, which is all I needed in this house the first 18 years, started to feel slightly on the cold side but 16-17C I like during winter days.

A mild cold robbed me of beautiful weeding weather last week. At first I noticed 17-18C inside didn't feel as comfortable as usual, and thought I was being lazy, again, or overdid it weeding in the cold. Unable to muster enough gumption to go out, and feeling slightly queasy, I started taking supermarket cold meds, which didn't work, so after a couple of days I got naughty and took another after two hours rather than the prescribed four and it finally kicked in.

I complained to Ben, and upon interrogation, it transpired I was supposed to take two capsules at a time, so the first couple of days I was on half dose. I probably knew previously but I take these so seldomly and most of my life I survived on half (or quarter) dose of most meds so I'm still miffed why it didn't work as usual. Do old bodies react less to medication, which to me sounds counterintuitive, or have some ingredients stopped working for me?

Yesterday I read some of the art/exhibition-related articles I've bookmarked in the last few months. There was no standouts, but I really enjoyed the reading, and was reminded how I struggled with art writing as a newbie 10-15 years ago. For me, the trick has been to read only what I like, and that turned out to be not necessarily about art I like, but the writing itself. I feel grownup having finally caught on to the fact there is "art writing", (as there are history, science, travel, food, book review, yaddah yaddah,) separate from art/artists, and some are to my taste, some are not. 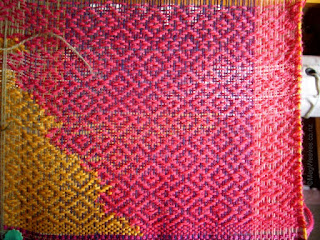 At long last, I saw the error of my ways with a not-as straight-forward treadling while mixing colors and considering composition on the cashmere warp, and started over, again, in 4-3-2-1-4-3-2-1-2-3-4-1-2-3. Not only can I weave faster, but the resultant cloth will be tider in theory. I wove as much in two hours, with a fever, as in two afternoons using the previous treadling. I'm also wondering if I should have all colors start from the side and not in the middle so as to avoid having to sew in weft ends in the middle of the piece and causing bumps in the cloth. (Pic above is not under tension but a couple of ends have weights on.) 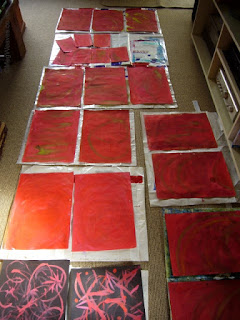 Vague images of drawing/painting/collage pop up in my head but I don't understand them and can't pin them down. I set out to make a few colorful pieces to be used in collages, but what came out was more fire and fury. Four reds, two greens, one brown watercolor and gouache on drawing paper, but too many layers, especially gouache, obliterated the earlier nuances. Pity.

Usually at times like these, I start making warps; maybe tomorrow. I have a few ideas I want to work out on the loom, too, but much later. 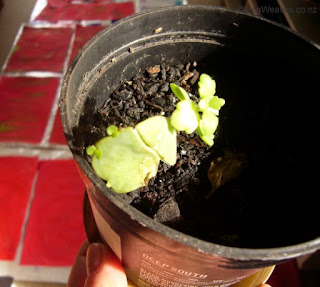 Unidentified succulent given to me by Kathleen, my Bowen Technique specialist, keeps breaking and growing babies. I have three biggish, (20-30cm) pieces outside, and tons of babies inside and they still keep growing babies! (Sorry the pic is so out of focus.) At her place, some mature plants in the ground were 50cm or taller and from memory had bluish/purplish flowers I mistook for something else. Cornflower?? Which is why she gave me some.

Ben's making almond flour cheesecake. Maybe that will get rid of my cold because we are both sick of me asking him if he's cold, too, every fifteen minutes.

EDIT: If you pay attention to the cashmere piece pic, where I change colors the over/under is sometimes disrupted. I haven't learned when that happens, but I hope to eventually because I've been able to see/fix some of the time. 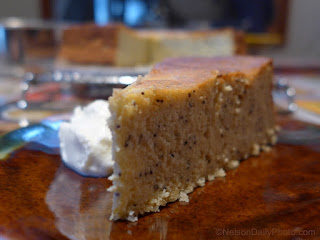