Men's Vogue - Not Quite the Answer 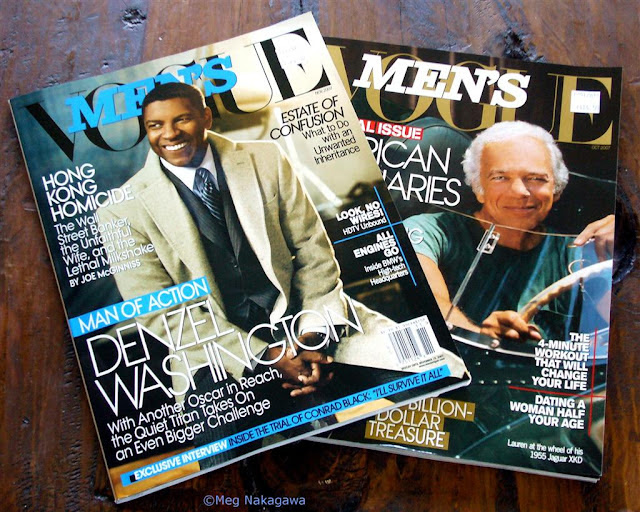 From time to time I am asked to weave something for a special man, and now I'm trying to have a few mens' scarves at the Red Gallery. Usually I go see French and Italian films for inspiration, but sometimes I am so engrossed by the story that after I come out of the theater I can't remember exactly what I liked about an outfit.

(I've been told men don't have outfits, but what do you call the overall look of a guy at any given time? Getup? Gear?)

So I went to my favorite bookstore and looked for style/fashion books/magazines for suits and coats from the last decade from the US, UK or Europe, (wide enough net, I thought), and after involving two staff, two computers and another walk around the shop, I came out with just one New Zealand men's "lifestyle" mag, which had three photos of men in suits, all casual, one with no tie, none of them too inspiring. I should have qualified it with "an older man's" suit/coats. So I went to The Magazine Shop down the road, and the man, who had owned the shop for two weeks, told me he's just learned about Men's Vogue.

I didn't know such thing existed. I shouldn't be surprised. In any bookstore in Tokyo, there are at least a couple of dozen men's fashion mags, so naturally there are those in the US as well. It's just that Nelson is not the fashion capital of New Zealand, especially when it comes to suits and nice coats, and I had gotten so used to this that it really took me by surprise.

Anyway, I purchased the October and November editions, they were not much help to me. Not a lot of suits, not a lot of older men, (except in the feature articles); I would have fared better had I bought maybe a luxury travel magazine to get photos with more atmosphere.

I had better luck Googling Daniel Auteuil and Marcello Mastroianni photos later that evening. Still, NZ$29 for a nice pic of Danzel is not a total loss, though I would have given him a camel-colored cashmere coat. Mumble mumble...
Posted by Meg at 12/04/2007 09:56:00 AM