And the intelligent, experienced weaver that I am, I went ahead and sleyed before I corrected the threading! Goodness gracious me; it took me most of today to remedy everything. And that takes all the gloss off of this new thing I’ve done. 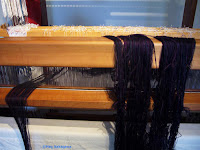 With 110/2 merino and other wool warps of the same size, I like to use my 6-dent reed and weave at 18EPI. With this warp, for the first time, I bunched together every three ends as I just threaded through the heddles. Theoretically, (that is, assuming I don’t make threading mistakes), I can put one bunch in each dent, cutting down on sleying time, and if I have to count how many ends I’ve already threaded, it is easier with the bunches.

I know it sounds so simple, but I never thought of it before last week.

I had just enough time to sample after that, and I was quite confident because I’ve woven with these yarns plenty of times, I’ve woven the structure on which this is based, and the color combination was a no brainer. Until I saw the sample on the loom.

Bright teal weft killed the purple variegated warp. I also sampled with muted teal, which looked more in harmony with the warp. If I were to go ahead with the muted, I had to order it right away.