So this is the other side of the Guild. Nelson Guild's show "The Real Kiwi Batch" opened at the Suter Tuesday night and I went to have a look. The whole show is about recreating the batch (beach house, originally of a simple, humble kind), and showcasing old-style mostly-wool craft. Just have a look. 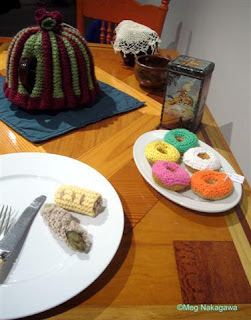 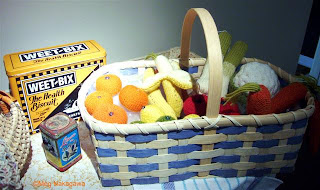 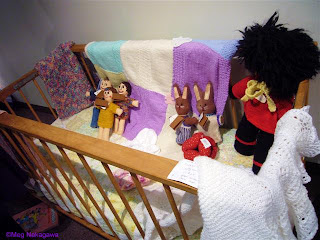 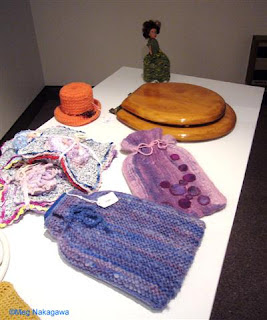 Rubber hot water bottles are still very much in use in New Zealand. 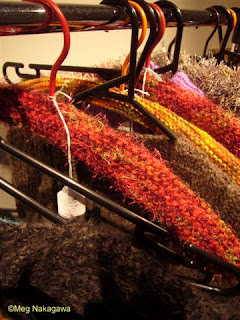 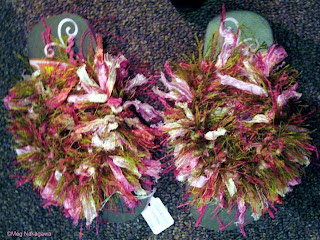 I thought I had taken twice the number of photos as I had! I particularly regret not being able to post three rocks-in-felt paperweights, and a beautifully crafted patchwork blanket made of old wool skirt fabrics.

Some of these crafts/articles have been pushed aside from the annual Festival exhibition, and I admit I was on the side of wanting to put old-style craft to "rest", so how wonderful it must have been for members of the Nelson Guild to engage in making these, and then proudly showcasing them in public. Members and guests, young and old, were giddy going around the room, shouting, "I used to have one just like that", or "Nana used to make heaps of them!!" The atmosphere was buoyant people instantly happy. 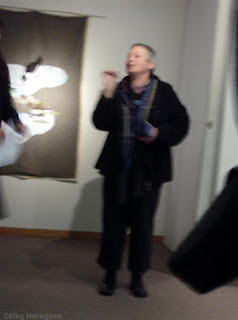 Big chocolate fish to Jo Kinross (not in focus, but this is so her,), Pat Spitz and others on the committee for creating a platform for these works, and for having the wonderful art support and city councilor Ali Boswijk to open.

I'm not saying the New Zealand guild is divide in two and at war with each other. Not at all; many members have their feet in both or many camps. But the recognition for a need for change in direction/focus has surfaced in the last few years, so much so that even outsiders like I read or hear about it. The divide in the styles of craft, I'm not 100% sure, but I think I've seen a reduction in certain articles, and it's probably safe to say there are changes taking place that has more to do with just fashion.
Posted by Meg at 7/03/2008 11:00:00 AM