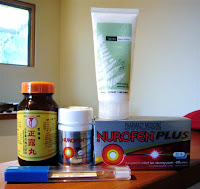 This is an unusually dull post, even for me, everybody. It's about a toothache. So I don't blame you if you don't want to finish. It just helps me concentrate on something other than the toothache.

The plan was to weave off the yellow warp last week, put on a wider cotton warp in scintillating color progression over the weekend, and weave the 15-shaft draft I made up for The Wall. That draft was meant to be an emergency draft, but it's my best draft to date. Around today or tomorrow, I was going to post it to the national guild (New Zealand Spinning, Weaving and Woolcrafts Society) exhibition, due next Monday-Wednesday.

The fact is, the yellow warp was heaps longer than I remembered, so after I wove the 11 samples, 15cm long, for the Cross Country sample exchange, due sometime last February-March-ish, I still got a proper scarf, and another.

By Monday I realized that I may not get around to warping and dressing the loom for a wider piece, so I'm weaving this last one in the 15-shaft draft just in case this is all I can finish in time (even though my form says it's about 30cm side). At least a backup, in case the wide one doesn't work out.

On Tuesday I cut in half and heated up a ciabatta in the oven. I was going to put sun-dried tomato spread, salami and leaves. While the bread was in the oven, I blogged a bit and bread got a little tough. But no worries, I went downstairs and ate it while looking at the piece off and on the loom. Well, the bread was quite tough, but the combination yummy.

That afternoon my teeth started to hurt, but I wasn't sure which one. By evening it was throbbing so I took two aspirin. It got progressively worse and I had to take a sleeping pill to go to sleep. But it got pretty bad so I resorted to this barbaric old Japanese pills that numbs the tissues inside my mouth; we use it maybe once ever five years, but we always have it, just in case. And ususally one-half does more than the trick, but that night, I ended up with something like eight in my mouth.

Wednesday was the pits. I was moaning and groaning because something about emitting voice produces nice vibration on the mouth/cheek area that seemed to soften the pain. I took some of Ben's regular Nurofen, and started to weave bright and early. After about 200 picks, I though I'd fall off the bench. Ben went to get Nurofen Plus (with codeine!!) and dropped it off before heading for work. I ripped right in, but they took two hours to kick in. You can only take two of these every four hours and maximum of 12 a day, for three days. And I don't think this is enough.

I rang the dentist, even though I knew he was in Europe for a month playing cricket, but I could have gone to see a locum today at 11 - except the City Cocuncil guy is coming to inspect a stairway and a workshop we got consent for... 10 years ago. The workshop was long done, (you know this because I've been weaving there for over five years) but we didn't want a stairway handrail (makes the stairs narrower) so we never installed it, AND the Council guy 10 years ago said it's OK as long as we installed it when we sell the house.

Since we have to replace the wood burner this summer, I thought it wiser to close any previous consent issues, so Ben installed the handrail, and that's getting inspected today, at 10:45. Besides, two of my favorite weavers are coming from Blenheim to have lunch at my house today; one's coming to see her dentist in Nelson apparently. So yesterday afternoon I made a creamy mushroom soup (and was sufficiently preoccupied) and then the rest of the day I squirmed on the couch, watched Oprah and read the NZ Listener (the lightest weight reading material I had). I intended to pick up and tidy the living room a bit, but I was too feverish I gave up.

So we'll see how today goes. Ideally, the Council guy will be happy how we've finished everything and close the case; Joan and Win will like the soup and we can talk weaving without my shivering or making inappropriate noises, and I can finish weaving the last scarf. Then I will go to figure drawing tomorrow morning, come home (canceled lunch with Rosie - I just couldn't see myself doing that,) wash/press the scarf. Come Saturday morning I shall post it and then go to my second color workshop. Or, I'll go find another dentist tomorrow.

But you know how life doesn't always work out the way you planned. At least I'm going though all my almost-finished moisturizers.
Posted by Meg at 8/21/2008 07:55:00 AM