Going Through the Motion of an Artist? 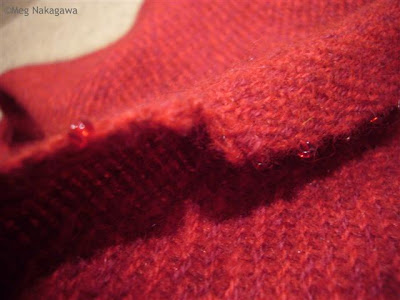 Here's something I started in mid-May, because I thought it sounded like the kind of thing artists do these days. It started a few days later I finished the SSVE scarf and was feeling liberated about doing things "not me".

I found two shawls with moth damage in March. These were woven in 2005 or 2006, were exhibited once, may have done their time in a gallery, but more or less sat in my stash room for at least a year. I did have, a little lower on my list, mending these pieces. One cold morning in May, when most of my "proper" pieces were in the "to be handwashed" basket, I grabbed one of these. It was amazingly light and soft and warm and I decided to keep this one. At first I thought I should mend it before the damage worsens, but I decided against it.

Don't "artists" nowadays make a big deal of these things and mend them badly and wear them and mend them again or damage then intentionally and in the end exhibit them? I thought of ancient porcelain in museums which are mended with white, beige or pink clay clearly marking which parts were authentic and which restored; I thought to mend this piece in such a way that the restoration would stand out from the original piece. Let it be more tattered before I mend it badly, in other words... And I took this to Wellington and Napier, damage and all.

But after having decided my next goal was "authenticity", and this kind of recycled/process "art" being so not my thing, I'm undecided once again. I don't find an obviously-mended (badly) piece attractive and if I do that I'd be embarassed to wear it, and yet the process is so "out there" that I might learn or experience something new, like the SSVE scarf.