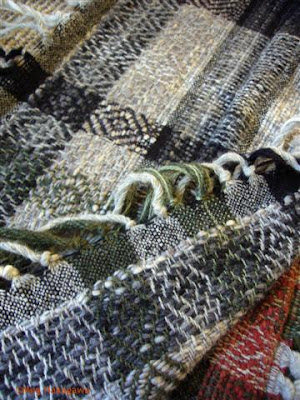 As in Murphy's Law. I've been working on a brother blanket to this one. I was so tardy when the Big Brother received his blanket, he was around 14 months; this wee brother is going to be around 19 months by the time this gets to him, however. And I do feel bad; how do you explain to a toddler the weaver had a bad year?? I hear there us even a little sister now! If the client wants a third blanket, tell me now! I might just tie on to this warp!

Even though I call them baby blankets, these are meant for toddling boys to carry them around, drag around, and do whatever little boys do, so they are not exceptionally soft. I imagine these blanket on the beach, in sand boxes, and even on paddocks.

As well, this client requests specific color schemes. So in the Big Brother's blue one, I used soft merino warps and sturdy wool called, in New Zealand, carpet singles. For this one, because of the colors requested and the range available from my warp source, I decided to go with a mix of nice and harsher warps and a softer weft.

The harsher warp (oh, but the gray is so beautiful!) was not nice to thread when my hay fever was at its worst, but armed with pills and spray allergy meds, and clad in an synthetic, long-sleeved apron and a shower cap, I persevered. (I couldn't use goggles because they fog up my glasses and I can't see!)

This is only my third double weave project. The first being this blanket for the same client, the second being Big Brother's, and though they're called double weave, I've only woven double-width weave outside one workshop. That makes this one the third double weave in four years. Read: inexperience and much too long in between.

I modified Big Brother's draft and made this one a 3/3 twill diamond. I copied the plain weave portion from the previous blanket, and reworked and checked the twill draft a couple of months ago. Or so I thought. When I started sampling, I got cylinders, so I corrected the drafts; the plain weave worked, but the twill was still cylindrical, so I corrected again; then I got two cylinders again! Two hours later, I finally got double-width plain and twill drafts.

While washing the sample, I forgot that the bottom of this sample piece is cylindrical, and panicked thinking its width shrunk to half that on the loom! What drama!

I like the darker, even-width weft better because the colors are saturated and the even size of the yarn doesn't distort the diamonds, but the lighter weft is much softer at 100% merino. I also have 10 balls of knitting alpaca that could do the job. It's thinner, about the size of the brown I used at the start to separate the warps, which may produce more attractive diamonds. But I'm yet to be converted to liking alpaca, so I didn't bother sampling. I'll decide whether the alpaca needs sampling, or one of these wefts is suitable after the sample dries completely.

Sometime during the flustered afternoon, I misplaced one of my two huge boat shuttles I use for fat wefts. I looked around, including tipping my huge fat wool box on the off chance I dropped it there, but no luck. It might well be during the next Big Clean when I can be reacquainted with that shuttle. Then I became unsure if I owned one or two of those shuttles! You'd think I'd know something like that like the ... name of my husband! Oh well, (and you know I wanted to use "h" in that second word instead,) I still have the first shuttle so I can work on this project. I hate getting old.