After I finished the last post, I felt dismayed to learn it's been nearly six months since my stash room had been put into some kind of order, and as far as I can remember I wove three blankets (one of which is still unfinished) and put on two warps on two looms, with one scarf almost finished. Come to think of it, I've been in a pretty bad mood since the middle of last week, feeling I was unproductive, not even being productive in trying to have fun while Ben is home. And knowing there is nothing that makes me feel my time has been well-spent than when I am involved in a weaving project of some kind.

I moped and nearly sat down to blog about that, but instead went downstairs to finish the scarf. And it's finished. The warp is grape-colored merino 2/16-17, weft is the same size, merino/mohair mix in variegated purple/green/navy. Sett 18EPI, pick about 41PPI, roughly 3380 picks to weave 205cm. And talk about asymmetry, while weaving I decided I wanted nearly 210cm instead of 180cm. So, let's say...

I can be pragmatic like that, and the weave structure is so that it won't look all that horrible. I'll take a picture of it once it's finished, The left selvedge is wobbly at best, but it's OK, I'm finished, and I can move on to the second piece from that warp, this time in a wine-colored merino, same size, same source, different draft.

So I came upstairs and we were treated to over half an hour of spectacular sunset, and that's what I wanted to share with you. 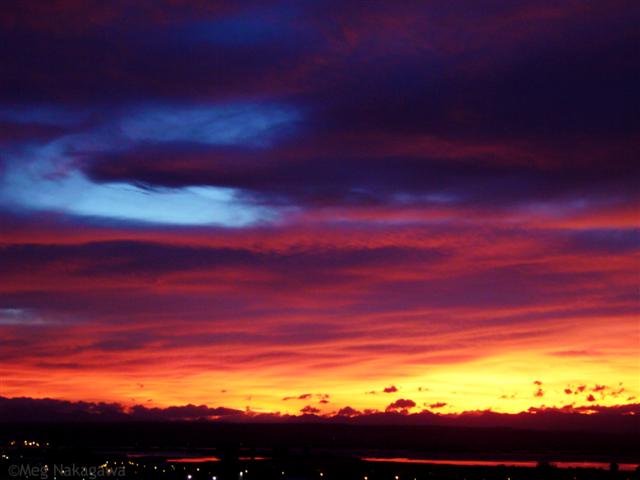 A new week starts, and I'll be helping hanging the textile exhibition during the day and I'll have at least one thing, albeit unfinished, to show the Marlborough Weavers meeting tomorrow night. And it's all go with Alison's design course merit certificate.