Things have been strange inside the head of this Unravelling Weaver for a while, strange as in unfamiliar, but not necessarily bad.

I've not been able to focus; my mind keeps wandering non-stop, and yet it's not been busy, not filled with the constant chatter. I flutter from one task to another, usually not finishing either. I've two dressed looms, both projects I like, but I can't stick with either long enough to make any progress.

Usually I wake up in the morning thinking of a few things I hope to do that day, and some days I write them down, but not only have I not been able to do any of them, I don't even think about it.

I walk though the day dazed, not confused, but floating. I'm a bit tired, I have had niggling lower back/hip problems, but I had two sessions with Bowen technique Kathleen, and I can't tell if I'm really hurting. Ben and I may be incubating a cold; we have the same symptoms, (mild headache, mild fever, general lethargy) but again, it could be psychosomatic. Or our innate laziness is rejoicing in their synchronicity. I keep forgetting things; I can't remember things.

But the intriguing, for me, is I seem to be operating on this whole new mode of incremental thinking/working. I usually need whole days of nothing on my calendar to focus; only then can I hunker down and work on one thing. I've had lots of nothing days for a few weeks, but I've not worked on anything for any length of time, but have been working incrementally on several things, and this is driving me crazy.

I even detect an element of revolt, though against what I have no idea. I'm not doing any of the things needing my urgent attention, but have been playing with ideas and "unimportant", "non-urgent" projects, consistently, and doggedly. I have been a life-long procrastinator, but this feels slightly different to my regular procrastination.

My brain feels old. If I ask you where the cabbages are, and you tell me where they are, but there are no whole cabbages so if I need a lot, I would have to buy two halves, I can repeat what you said, and can find the cabbages, but that seems to use up all my brain juice and I will have forgotten or not connected with with you told me about my having to buy two halves.

On Wednesday, Kath was telling me about a book she read recently, and she surprised me by pointing out that almost every time I see her, I talk about my weight and how I must exercise and must not each whatever we're having at the time. I never noticed that, but I know this is a defense mechanism of sorts: a) I know must exercise more and get in a better shape for my health, and b) my parents have been on my back about my weight since I was 9, and my Dad is still quite relentless about it, so by my talking about it, I'm acknowledging that I know these things, preventing from others bringing the issue up, and as Kath pointed out, letting me off the hook from the things I think I should be doing. That was an eye opener.

A few years ago, Jay Farnsworth of the Red Gallery told me not to make self-deprecating remarks, of which she said I do very often. At least I was vaguely aware of this, but I thought it was funny, and never imagined it could be a downer for my friends. But low self-esteem is a hard thing to overcome, it's been hard to try to stop making self-deprecating jokes.

With the weight thing, though, it's harder, because I hadn't realized I did it. It was a constant topic in my parents' house, and though I begged my mother to talk about something else, (still do!), I never realized I did it, too.

I haven't been able to concentrate long enough to read a short magazine article, let alone "Women Who Run with Wolves", but this is the strangest of all: I've been making slow but steady progress in "Conceptual Art" by Tony Godfrey, (Phaidon), a book which previously would have collected dust and fluff and bugs at the bottom of the pile under my bed. And I'm really enjoying this book.

Is there a psychologist or a neurologist in the room? Is there a shift coming, or am I descending into somewhere different? I've wondered if I've been going senile for a few years, and even had myself tested a while ago, but aging, changes in my operation mode, and self-esteem seem all connected somewhere, and I don't understand what' going on. Do you? Does anyone know what's going on??

I'm at the tail end of my depression medication; I've often forgotten to take them since the dosage was reduced to 1/4 pill in February, and for now, I'm in denial that I'm going down that way again, but that's also always a possibility. I can't determine if I've managed to pick up coping skills by doing things incrementally, therefore managing depression.

Or, I am now living in another sphere that co-exists with the world I used to live in, but I didn't know I transitioned. Kind of like finding myself on Platform 9 3/4. 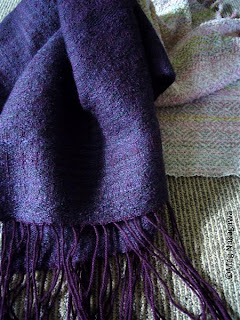 Yesterday, I forced myself to sit down to fringe and mend the "other" cherry blanket and a scarf that came off the loom more than a month ago. Or was it more recent? It's been a while since I fringed, and I had forgotten how time consuming it is, but I got them done late last night so I could was them today. This morning, however I was in the shower too long, did a load of laundry, and then cleaned the kitchen with some gusto, and I used up all the hot water, so these will be washed on the weekend. 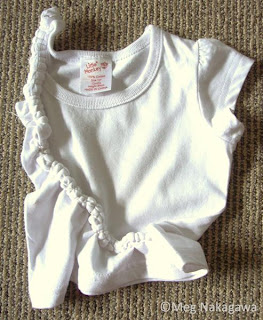 Last night, on a whim, I prepared this baby T shirt for the dye bath; it will be tucked in the corner when I finally decide what to do with the second dunking of my second shirt. 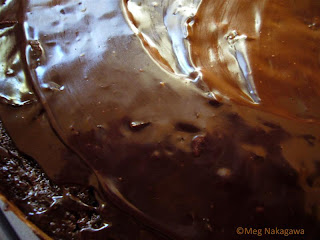 And remember the sorry saga of not being able to find Claudia's 40th birthday party? Bless her, she is having us over for dinner tonight so we can do over. In fact, we're celebrating her, Ben's and my birthday, all in April, and the only one who has a birthday in November, Tim, is cooking. I did my bit and made a lime/chocolate cake.
Posted by Meg at 4/22/2010 02:05:00 PM