In my hometown of Yokohama, there is a famous shopping district called Motomachi. It's really just one short stretch of a road, three or four blocks, but because of it's proximity to the port of Yokohama, we were able to find exotic goods there before everything became available everywhere in the 70's/80's, and people came from all over Japan just to walk down Motomachi Dohri street.

In Motomachi there is an exquisite lace shop, (table linens and women's handkerchiefs), called Chikazawa; the company was founded in 1901 and even has a Wiki entry. Whenever we went to Motomachi, (most memorably whenever my mother took me to her high school class reunion, her school being just up the hill and elegant shopping being part of her high school life, lucky girl,) we made it a habit of stopping by Chikazawa to admire their goods. My favorite has always been the very subtle Chinese gray embroidery on white linen; every time we walked in, I sighed in front of every piece, while my mom and the man at the shop smiled at my "very old" taste. I also liked the white cut work after I learned how they were made, but I loved the elegant gray embroidery like not many other things in my life. I still do.

My mother had few of these handkerchiefs tucked away in her hankies and jewelry drawer, and I grew up believing when I'm old enough I'd naturally have some. And because she didn't use them often, I learned how special they are.

When I got my first proper job, I started buying them for my mother, my sister, my girlfriends and colleagues; this was in the bubbly, gaudy 80's and I desperately tried to pull these women's attention back to elegant, slowly hand-made cloths. I loved to see the look on their faces when they opened my gifts, and it didn't bother me much that nobody used them. But I never bought one for myself, partially because I wasn't in the habit of spending that kind of money on myself, (aren't we all?), partially because I always believed someone (Mother!) should buy me one as a very special gift, but most urgently, because I could never decide on just one, or three.

Since Chikazawa began opening shops all over, they started to sell colorful, inelegant, cheap pieces as well. I still go to look at the delicate gray works from time to time, but my admiration for Chikazawa has been tainted. Most of the wood-and-glass shop+dwellings were replaced by the plasticy 80's so-called architecture, (including Chikazawa,) and some old establishments have gone, while anywhere-shops like Gap have moved in. And I discovered my mother finds these Chinese-embroidered hankies a little to fussy for her taste!

Yesterday, Ben came home and gave me a reward, a parcel from Sampling in Australia. In it was a lovely birthday card, but you can well-imagine my heart skipping a beat when I opened the purple wrapping. Five delicately monogrammed linen pieces!!! 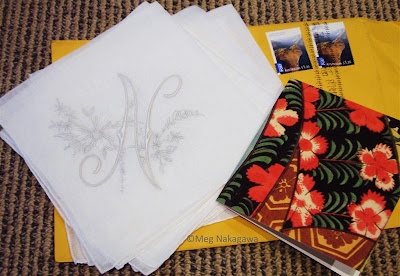 Thank you so much, Sampling. You've made me happier than you can ever imagine; all the lovely times I spent with my mother in Motomachi is flooding back to me. Thank you, again.