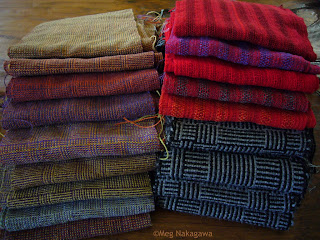 I finished the last of my Log Cabin scarf on Thursday.  I'm relieved, because I was getting tired of them, though I have an idea for another Log Cabin: this next will be around 36EPI so it won't go on the four-shaft Jack downstairs with its metal heddles, but one of the table looms with the soft heddles.

Starting tomorrow, I have to mend/hem/wash/press/tag and photograph 18 pieces; 4 alpaca Log Cabin, one red cashmere plain weave warp, and two cashmere Log Cabin warps; then deliver them to galleries ASAP.  Except for the two red pieces which will be gifts to two clients who over the years have bought around half a dozen of my pieces, each.

The first Log Cabin warp ended up being woven in 18EPI after sampling; the last Log Cabin warp I returned to 16EPI and they feel and look different enough now; I'm curious to know how they'll turn out finished.

I've been thinking of that dreaded thing: price.  The cashmere pieces will be priced the same as all my other cashmeres, and I don't have a problem with it for the moment.  But the alpacas are one- (well, four-) offs, and I'd like to sell them at a low price because other than my nearly dyeing of hayfever from this yarn, the work was simple and straight forward.

I have, though, been thinking about prices in general.  Those of you in non-Rugby (Union) places may not know but New Zealand is hosting Rugby World Cup later this year, and some New Zealand travel sectors have been criticized for opportunistic pricing.  Accommodation costs, for example, are fantastic, as in, they are dreaming!  I can't remember the details but some places are charging not double or triple but 10 or 20 times the regular prices.

There are two sides to the story: tourism in New Zealand has changed, from many Japanese tours dropping big money for fewer days' stay in the early 90's to more European backpackers, cyclist and freedom campers staying for longer but spending less per day.  The common perception is New Zealand doesn't give a nice big bang for the buck.  I think this is true; for a country that's supposed to be about walking and jumping off bridges and looking at the scenery, however spectacular, there seems to be an overwhelming number of high-end lodges.  (I see then on the telly or read about them in the paper.)

But this is the big chance for the industry to make big bucks, the government has been telling us so, so we fork out a lot of dosh to pretty up the stadiums and roads and make new party venues.  And folks do need to make the most of the opportunity, so it's not just greed.  As regards RWC, I don't care, because some tickets cost over $1,000, so complain they may but some folks can afford the outrageous accommodations.

What I have been thinking is the bang-for-buck factor, opportunism and greed. My pieces are high, even in comparison to work by more experienced weavers, because a) I use the best material I can find, b) New Zealand yarns are terribly expensive in New Zealand, and c) my first outlet was the Red Gallery, and Jay and I set the price fitting the Red clientèle.  I now have The Suter which carries a wider range but I never undercut the Red, and I keep the Refinery unique so prices for pieces there have different sets of criteria.

While most of my commissions are from New Zealanders, gallery sales used to be almost exclusively by overseas visitors, (many from the UK,) but now the ratio is closer to half New Zealanders and half visitors. I've seen travelogues by visitors to New Zealand, (most of them very young, though, so not exactly my target market,) who so often mention New Zealand is an expensive place.  Some prices here are on par with Tokyo, and I'm astounded by how inexpensive some things are in the US and Australia.  I have had frank discussions with weaver friends who travel a lot, and they feel my prices are at the high end but generally reasonable considering the material and the work.

My prices aren't opportunistic, in my mind, but I feel visitors don't feel the bang-for-buck with my pieces, and I don't want to be greedy.  I'd rather they take home my piece and I'm having a hard time trying to figure out the right place in this economy.  (Mind you, you all probably know the high end art market isn't suffering too terribly, and this is why we decided not to lower the cashmere price for now.)

I have no conclusions on the matter for now, but I need to have some clear ideas or scheme for pricing when I open my Etsy shop, which I hope will be sometime before mid year this year. 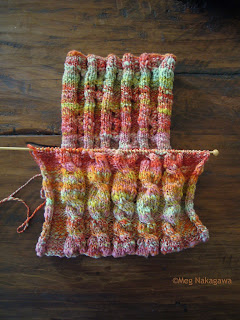 I've also been knitting a small pillow/cushion cover (30cm * 30cm) with my handspun/plied in the evenings, because I wanted to see the yarns made into something, but this being my second knitting project, I'm playing it safe.  I'm also longing for autumn and winter, and I thought if I knitted, I might be able to pretend we are in a cooler, more pensive season.  Plus, I don't feel too guilty watching the television in the evenings this way.

After I was a little over halfway done, I found a wee glitch.  I had thought I owned four needles with the bulbs at the end all in the same size, but they felt a little different Thursday night so I checked and discovered I have two 3mm and two 3.75mm needles. So this explains why some rows felt so tight and some not so; I was using the two sizes indiscriminately.  (The four needles without the bulbs were all in the same size.  I checked.)

I'll live; this is the good thing about "just for fun" projects.  Another evening and I'll be done knitting, and then it'll take perhaps half a day to stitch it up?  The funny thing is, the colors aren't as saturated in real life as they appear in this picture.  In fact, I can only see hints of the mint green or turmeric yellow and the overall impression is orange.  But I'll leave the photo this way because it looks quirkier.

For my kind of knitting of not very rigorously tested items, (the first was a hat,) I think I prefer singles.  I still have some sliver left, except the oranges, so I've put in a small order for the three oranges, and I can't wait to get them.
Posted by Meg at 2/20/2011 07:31:00 PM