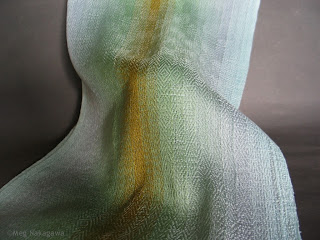 It was another unusual week; eventful may be the right word.

I spent much of the week preparing to send stuff to Handmade for Christchurch, both physically and electronically.  I had intended to send four more cottons, but I found minute damages in two, so I stopped at 12.  These damages are due to the material of my labels and the weight of my tags hanging from the labels; so, inadvertently, a good lesson for me and a change of tactics; I'll show you what I mean some time.

Pricing for charity is difficult; I didn't want to undercut galleries or clients who have already bought similar pieces, so I withdrew similar pieces from the galleries and had to think of past prices.  (My record keeping is a little beyond shocking, so I didn't even go there.) I just couldn't remember the price of one series, but I hope I'm forgiven because it was a few years ago.

I had no idea for good start bid prices; it appears there are no similar stuff donated to H4C, so I made a rule for myself to ask for roughly 1/3 to 1/4 of what I thought the retail prices might have been. Experimental pieces and woven-just-for fun pieces were easier. I'm still not sure if some are set too high, and because it's charity, I so desperately want them to be affordable and attractive and to sell.  For the Sallies and Women's Refuge, and for H4C.

And... yeah, it would be a little embarrassing if nobody bids, but I have a couple of ideas about what to do if that happens.

The TV earthquake coverage has been curtailed, somewhat after the one week mark on Tuesday, and quite a bit more after rescue turned into recovery on Thursday, and what coverage they do tended to be more tabloid, so I'm not interested. I've been listening to National Radio more, as they continue to alter their program somewhat, but all in all it was probably good timing because I've been thinking I need to ween myself from the coverage a little bit.

It's not 24/7, and when it really bothers me, I put on nice smelling salves or drink lovely smelling tea, but I wished it were a less alarming smell, so I don't rush around looking for fire every so often.

Thursday night, Kath told me a friend of hers thought it was a ghost of a person who died in fire or smoke.  Kath and I don't believe in the supernatural too seriously, but I did think of two groups of Japanese students who parishes in English language school in the Canterbury TV building, the only building top have suffered from extensive fire after the quake. Kath told me her friend said  my ghost/s had unresolved issues so I needed to ask what they wanted and then ask them to go away.  And not knowing how to communicate with ghosts, I left a pen and a notepad in the living room Thursday night.

Because I still think the smell of smoke is psychosomatic, if there were such lost souls, and if I could help, (I had in mind a young Japanese man to tell his parents a final "thanks" or some such,) I wasn't going to let my skepticism get in the way.  But no message in the morning.  Though the lid of the CD player was open.

Friday morning class was good.  Ronette swapped classrooms so we had a wee bit more space, and we had a lovely model, and all was good.  We did pale wash and minimum contours or darker wash, and it was hard to not overdo the contours.  One extra line ruined the whole lot, but it was exciting to thinking about maximum effect for minimum drawing.

After lunch I delivered two pieces to the Refinery, not the alpacas, chatted with Roger, spoke to Lloyd as he shot out the building, went to the Red to see the teal/burnt-orange painting again, (which turned out to be a much more scintillating painting that I had thought last week; I can see why Jay loves it,) tried to politely and secretly exorcise myself of the alpaca scarves but couldn't because the swing tags were attached too securely and I didn't have scissors with me.

I went to the cinema to see what was playing, didn't find anything unless I was to wait nearly two hours, discovered a bus was leaving in 10 minutes, ran, hopped on the bus, and came home.  I turned on the computer to email Ben that I was home, (so he wouldn't wait for me to show up at his office at the end of his work day,) found an email from Lloyd telling me Refinery sold one piece, so they need another!  First sale in more than six months.

Ben came home with easy-to-assemble supper parts, handed me mail from the Suter, (another sale!), and we sat down for a decadent wine and snack supper. I was feeling exhausted and bothered by the smoke.  Later, I was still watching the telly when Ben shouted and told me to come to the office right away.  I slowly made my way like a slug, when he showed me one of my pieces had been listed on H4C and someone had put a bid already! (Thank you so very much, Judy!)