Nice to See You All 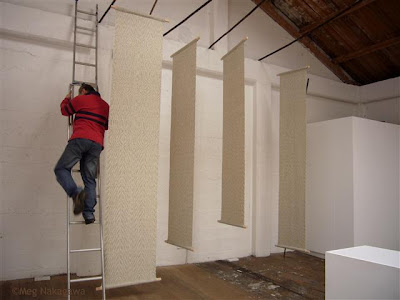 This is the first time I saw them, individually and collectively, vertically and in full lengths. I felt as though I had been pregnant for 30 months with quads and finally delivered. And then the detachment settled in. I usually enjoy the editing and fine-tuning but yesterday I was tired and indecisive. Ben got a five-hour good workout. 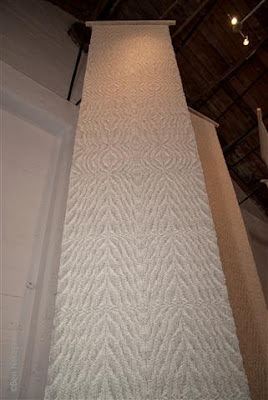 This is Ben's attempt: he was either sitting on or lying on the floor they look longer than they are.

Very early on, I built a scale model of a corner of the gallery with pillars of various lengths and widths and people 150cm (me) and 180cm (Duncan) tall, to get a better sense of scale and design. Yesterday Duncan said in the first instance his eyes went to right about where the design changes, so though I wasn't exactly sure what I was doing, it sure went to plan.

I meet my electrician, who's already been to the gallery to see them, to discuss his lighting proposal. Then we get interviewed by two local newspaper folks. I also need more photos so I can have postcards made.

Until late yesterday I still felt terrible about not having the friends(hip) piece in this exhibition. But after most everything was hung, I realized the big gallery hasn't got saturated hues and now I see perhaps that piece was meant to go to another exhibition. That very red piece would have stuck out like a very sore thumb.