After the excitement of match-making this morning, I had to do something about the two-faced twill piece, so I finished weaving the first piece. Ugh.

I wanted to do something different, so I went in the direction of what I thought of as big, bold, and "graphic". It works in theory. If you get a few black/white pieces of 3.5cm square and place them on a white/black sheet 20.5cm wide, you could make some striking "pictures". And my squares can be seen from some distance, even though I used three light/medium blues in the weft and didn't create as much value contrast as black and white.

But they are 1/3 vs 3/1 twills. What you see from a mid-distance is the same as what you see close up. There are no surprises; there is nothing to discover later; and that makes it legitimately boring. Trust me on this.  So though I had a more interesting plan for the second piece, I might rethread tomorrow morning, based on basically the same idea, but with a little more close-up interest. I'm not comfortable weaving cashmere on the big loom, either.

As regards my relationship with Santa Fe, I'm still courting them and I get nervous about what I weave. Better late than ugly, but my tardiness is getting a little ridiculous, so I'm nervous+ nowadays.

In preparing my envelopes for Weaver to Weaver, I found myself staring at crossword puzzles in a magazine. I thought to use them as a starting point for a tie-up or a lift plan sometime. Ben didn't get it, but I know you'd understand.

We've been having some stupid weather; big wind dying suddenly, blinding sun, sudden darkness followed by a shower, sometimes blinding sun and shower. It's making me silly, so the basement is the right place to be. 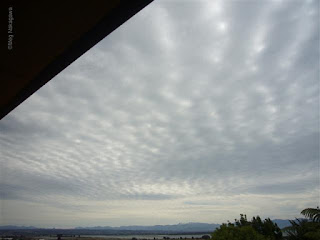 Fish scale cloud all over the sky around 3PM. We get clouds, we get this kind, but seldom all over like today. 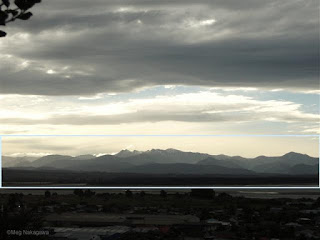 Around 6PM. I've probably shown you these hills many times over the years, but again, it's not that often I can see the many ridge lines and gradation this like this.