As you know, I was originally scheduled to go home on Friday but gave myself 12 extra days here; I now leave in 11 days. Which has come to mean I will probably have 11 days left with my Dad in his lifetime. And goodness me, I'd been objective/detached about death in general all my life, it has been thus in my family as long as I can remember, but I'm not ready for him to go. And yet I don't want this stage to last too long, as the quality of his life is, for me and Mom, unfathomably low. It doesn't mean I'm doing anything much differently; &deity knows I'm not talking to him about anything important/emotional. I keep focusing on things I can do around the house to relieve work in the short-to-mid term, because that's easier. He doesn't (always) help in being approachable, either.

It's been surprisingly turbulent. 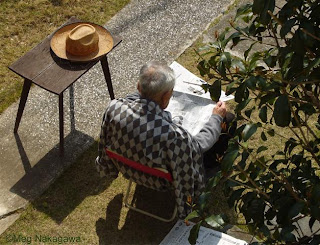 That's Dad reading newspaper in the sun, his most enjoyable activity these days and among only a few he can do completely by himself. When he has his maroon cardy and straw hat on, he looks a smidgen like Vincent.

I have felt as though I've been shoving my version of kindness down Mom's throat, and we even started picking on each other, but here, too, I try to focus on the tasks at hand. In a couple of instances, she thought I was being a Royal Pain but in the end these were jobs that needed to be done for decades and I know Mom feels better for having them gotten out of the way without too much involvement. We need to stop taking snipes at each other.

Mom's red cushions have been completed and much admired. 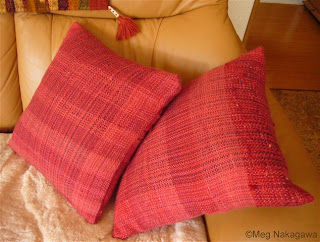 Mom's next project is well under way; it's a cashmere and silk scarf, but we won't tell her she has two picks in one shed, will we? 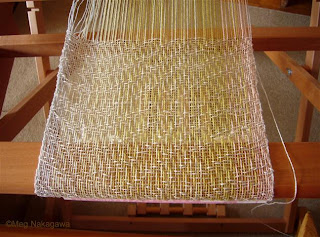 Mine's been waiting to be threaded for ages but "life" has higher priority at the moment... 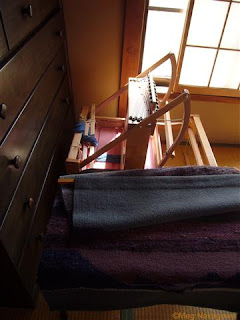 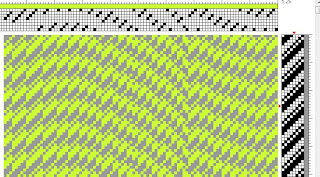 I did go to one exhibition with my sister; it was a the National Art Museum's craft annex and there were ceramics, textiles, wood, glass and metal work with floral motifs. 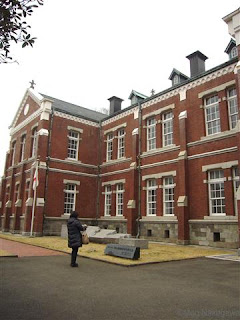 Sis had to rush home on account of her kids, but I went to a yarn shop Mom described as "uninspiring" a month ago. Uninspiring it may have been for her, but I came home with a small sample of 2/44 wool that feels as though it contains New Zealand or Australian merino, and fingers cross, hope to revisit before their 20% sale is over.