I was in Japan for 51 days. I'll have been in Nelson between 53 and 55 days, depending on which day Tim the Super Travel Agent gets me on the plane. It all means I have between 22 and 24 days before I leave to do whatever needs doing. Taking the time to figure out these numbers relaxes me. I'm a bit of a nerd like that.

I'll need a cell phone during my next trip. Usually I borrow. Mom's, and usually when I was out Mom was home. Failing that, one of us would ring home from pay phone and Dad would convey messages. This next trip there is a good chance we'll be out at the same time, in different places, and I don't think Dad will be up to the task. I could borrow Dad's, but that and the Blue Ray remote are his last toys, and I don't have a heart to take that away from him. Yet. For people who don't live in Japan, it's tricky buying or renting a phone, (Ben tried it during his family's emergencies,) and my phone can't text in Japanese and roaming is expensive. My sister says she will rent one for me if need be. I'm still glad they brought back pay phones after the Big Earthquake; they were virtually extinct.

Some time ago I suggested Ben take a week off once the dust settles on Phase I of Crazy Busy-ness, before Phase II starts. So he took the third week of May off. Which wasn't a problem until yesterday when I decided I need to go now, so I asked him if he could change it to the previous week so I can leave earlier. Apparently he can't, because his Candy Car needs to get the semi-annual Warrant of Fitness on the Tuesday, requiring him to spend most of the day in town, so he'd rather work. And if I wanted to leave on his week off, he didn't mind. W. T. F.

Once, during one of his family's emergencies, from memory, one of the cars' WOF expired, but he said we're fine as long as we drive it only take it to a WOF appointment at a later date. Which apparently doesn't apply when it's my turn to have to go? And I asked him to take the week off because, among other things, I wanted to do stuff with him.

Ben doesn't do anything to spite anyone, and he holds no malice towards anyone, (even some folks I think he should,) and he always says only what he means so I never have to guess. But, but, but.  WTF. Right?  Doesn't he get that every time I talk to Mom or Sister I want to leave now, but I also want to hang out with him because we've done so little of that since... around October 2011??

Anyhoo, I'll be right. There are, really, some things I want to get done around the house that was postponed this summer. The question is, which job should I tackle? Weed? Plant the stuff on pots I was going to put in the ground this winter? Or should I weave, because there are two commissions from Japan that can be done on the same warp? Decisions, decisions. 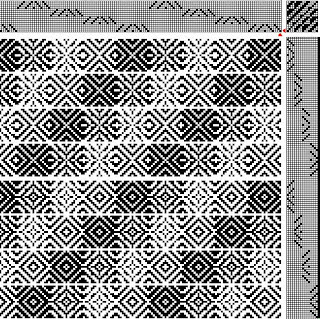 Postcard to Mom this week: by changing the direction in the treadling pattern, you can make X's or diamonds!

It's our 23rd anniversary tomorrow; my sister's 18th on Monday. I'm thinking a lot about family, naturally, but about... changing of the guard, as it were. We are the "main" generation that make things happen, and our presence is required.
Posted by Meg at 4/27/2013 10:24:00 PM