The Couch in the Front Hallway is Gone

Our weight-scale shows numbers 1.5 (Ben) -1.8 (me) kgs lighter compared the numbers on our doctor's office scales, (I tried two!), so the wee bit extra I thought I had lost since coming home from Japan is still on me. Such a crushing discovery, though I had the sneaky suspicion...

I enjoyed collaging the other day as much as I did in Japan. I think of collaging often, but can't get started as light-heartedly as I used to. I'm overwhelmed by the amount of material I saved over the years. So I used only a subset this time; I looked only at material from which I had already cut something out and if I didn't find anything attractive, I threw it away; if I found something attractive I cut those out, then threw the rest away. That was a good move.

Funny story about my Not-Laharya-turned-Albatross project; it's self-inflicted. I'll share with you the draft of what's going into my tiny swing tag insert:

"Dad died in May 2013 and I spent four months with Mom sorting the house for her move. One job she insisted I tackle was culling photos; my parents travelled extensively in their 60’s and 70’s and there were no less than fifty travel photo albums alone. Mom reminisced a little, but our conversation invariably ended on the one tour to India Dad missed due to low numbers. Then we would proceed upstairs to discuss textiles she collected on her three other trips to India. This series was inspired by one of them.

"In healthier days Dad helped Mom winding new skeins and leftover wefts into neatly-wound balls, every one weighed, labelled and a short piece of white cotton tied to the end. He also made tiny, tight knots. Weavers take out the knots from handweaving so there are no hard bumps in the woven cloth, but while making this warp with Mom’s yarns, I did not have the heart to take out Dad’s knots. So this piece has his knots in the cloth. As this piece ages, some of the knots may become visible, or more noticeable in the cloth."

This is the biggest part of the reason I contacted Jill in Santa Fe instead of sending her the pieces as I usually do; I felt the description in the tag would be more suitable for exhibition blurb/piece and not on merchandise. You can't feel them at this point by wearing or wrapping your neck and shoulders in them; I can see only one knot in all four pieces. But Jill agreed. And that made me feel sad.  Which shouldn't because we're on the same page.

Then I thought to create a tiny Pop-Up shop on this blog/website and put these, and some others, there, except taking photographs, writing descriptions and inserting PayPal buttons seemed like so much work I dithered. Then Suter informed artists to bring additional work for their shop, if we wanted to, before Andrea goes on holiday, so I discussed this with Andrea, and she thought as long as I made it clear, it would probably be alright. So it looks like I'm auditioning three of the Not-Laharya pieces next week.

What do you think about my knots? What would you do?

But I like the idea of my Pop-Up shop here. I want to weave experimental, (for me, you understand,) and one-off pieces that may or may not suit the galleries. Or just because I want folks to have it. So I'll have to work on it some time in the near future. Nah, not worried about missing pre-Chrismas; I don't have enough stock.

Wouldn't it be nice if we could weave, oh, at one-tenth the speed we concoct ideas and projects? Or even one-twentieth? I have so many things I want to weave but manage to put about one-one-hundredth on the loom. I've been more than a little annoyed about my slowness of late.

Crisis: which leftover swatch would you use as lining for the trill fabric? At first I thought the dark red at the bottom, no contest; then Ben started his "Kiwi! Kiwi!" chant ; now I'm thinking reindeer isn't bad, either. 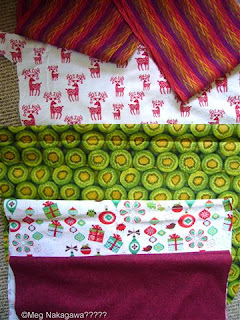