In tree short days, we handed out a little over 100 takeaway catalogues, and from memory around 60 signed the guest book. Mom and I reckon we welcomed around 90 friends, friends of friends, and family of exhibitors, and perhaps a couple of dozen cashmere shop shoppers. (The shop held a big sale during the week also, so some of our visitors went home with lovely mementos.)

Mom was in attendance almost the entire time; I was there perhaps half the time; Mrs T and Mrs E when rostered. I tried to take pictures when I remembered, but hardly enough; at times the tiny venue was as crowded as a commuter train and I had to step out, at others we were engaged in reminiscing with folks from our past, from time to time we had to explain weaving techniques. 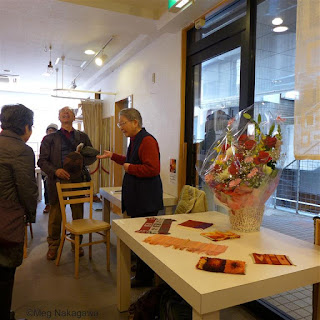 Dad's early graduate looking dapper at 71 and a weaver from Mom's neighboring building, a friend of my brother's mother-in-law, whom we met that morning. As soon as they received invites, Mom's friends started calling to find out when she'd be at the venue. Her second and longest-term teacher in the hat and scarf, who lives minutes away from the venue, did not ring so we worried about her health. It turned out she conspired with four or five of Mom's former study mates and popped up "en masse" on Day One. Mom was even more surprised when her husband stopped by later that day. 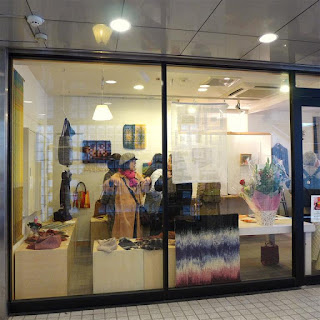 Weavers can relate: teacher explaining how to weave transparencies with regards to beating. 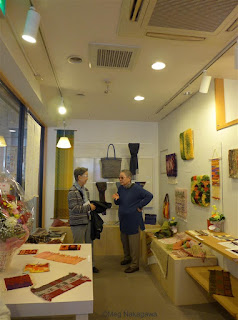 The achingly elegant mother-in-law of my sister's, wearing a piece I wove some years ago, with many pastel colors. It's a dreadfully difficult piece to color-coordinate with garments, but of course she had an elegant gray jacket with flecks of pink and from memory pale blue. Her two poised nieces came earlier in the day, although what I'll remember a long time is that brought me treats from Okano Eizen, a specialty Japanese treat place near my offices in IBM days, where sometimes I took orders from colleagues and stood in the long queue. I think they knew. 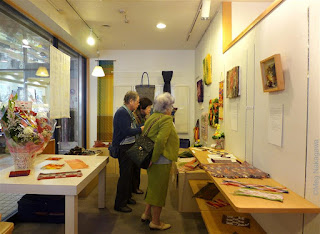 Two of three of Mom's high school friends who travel together once a month. (She just came home from an overnight trip to see Mt Fuji yesterday.) Another was busy seeing her grandchild get married. It's incomprehensible to me that they met over 70 years ago, that's Mom pre-Dad.

Members of Mom's English class, former neighbors, (one of whom said she'd seen the New Zealand moss piece in a previous exhibition,) former classmates under Mom's first weaving teacher, (and serious weavers among them, I'm told,) sister, brother, sister-in-law, one of my fav cousins, (who spent practically the whole day hanging with me,) and a former work colleague, and a few patient husbands were among those I couldn't shoot.

The exhibition, in the first instance, was cute; it was small, exhibited pieces were not large for the most part and friendly, none "challenging" or out there. The A6-sized takeaway catalogue was, you've got to admit, very cute. It was also a familiar exhibition in that the exhibited pieces were unpretentious and handmade, many well-used. The exhibition did not have the clinical, minimalist, "professional" look, but something of a peek into someone's treasure chest.

On closer look, however, if you were a textile/weaving aficionado, one could see the depth brought on by the variety of techniques and material, and by the different preferences of multiple makers. Mom's samples/notes/drafts were exhibited to showcase her knowledge and experience in the first place, but came in handy to explain/describe.

Mom had so much fun because she only had to stay in one place and friends and family from all areas and eras of her life came to see her; she likened it to having her own funeral except she got to talk to folks.

Mrs T and Mrs E saw their "humble" works in a different light in an exhibition, which was another goal of mine. Though they'll continue to weave for their loved ones and themselves, it's nice to imagine they'll carry something of this new perspective as they plan and work in future.

We savored the significance of the first two and the near-last visitors being from Dad's past: one of Dad's first graduates; the wife of a PhD comrades, (because Mr PhD was busy volunteering planting trees in Borneo;) and the wife of the student with whom Dad and the family had the longest association with, (Senior, Masters, PhD, then Dad's assistant for a few years,) because Mr Long Association still works a few days a week.

Dad enthusiastically supported both our ventures into weaving, (and a few others of Mom's,) and unstintingly gave us financial support. After retirement, he turned Mom's cones and skeins into precisely equal-weight balls so Mom could make warps multiple ends at a time. Towards the end of his life after he went blind in one eye, he liked works that contained red, which he could see better, instead of "New Zealand green" (approximately forest green,) he loved previously. And he tolerated us making numerous things for him, both nice and experimental.

We were delighted Mom's exhibition turned into an homage to Dad, to feel he's still very relevant in our current lives. If you believe people who passed on live on as long as we remember them, Dad had a heck of a busy month and must be relieved to be back in quiet retirement.

Hard to believe the exhibition came down two weeks ago; it means I've been home a week, too. I've been working on the four-shaft, contemplating randomness on the loom, but that's for later.
Posted by Meg at 3/18/2016 11:00:00 PM