So the red warp. Meant for fabric for Mom to be made into a piece of clothing. (I had in mind a simple vest with possibly a stand collar. ) 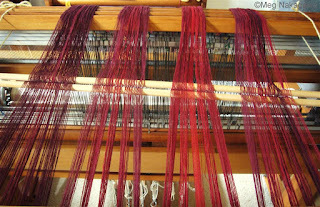 The colors were supposed to be symmetrical with the lightest red in the center, having five sections of five stripes of 18 ends each;  25 inches wide at 18EPI. The far right section looks weird because I managed with what yarns I had left after emptying two new cones, and mixed a thicker merino, close enough to one of the reds. I thought Mom can get around, or make use of, the anomaly while the designing the garment.

It's a full-length warp so had I been more careful, it would have been more reasonable to make a shorter/wider warp according to plan. If I have warp left after the fabric, which is very likely, I'll have to edit before moving on to non-fabric.

The last time I attempted fabric-to-sew was 2002, when "superwash" hadn't entered my weaving vocabulary. Back then wool having scales was a given in my environment so as long as I got the sett/pick, floats and the wet-finish right, there wasn't much else to think about. But in this brave, new, easy-to-wash world, I find myself having to step back and try to remember the things I took for granted. Let me think.

1) Cashmere doesn't full much, the extra merino will, so one selvedge may scallop. 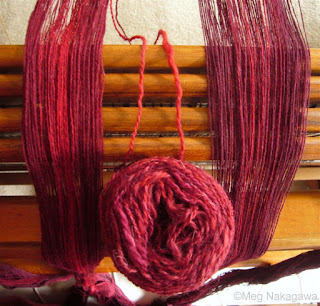 2) The weft is much thicker than usual cf. the size of the warp and the sett; sample 18EPI, as well as 16/15 but probably no sparser to avoid weft-dominance. 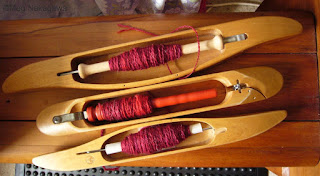 3) Cashmere is brittle so too sparse a sett and the shuttle will hit/break the warp and/or fall through the gap. Try all shuttles.
4) The pick needs experimenting; I don't want a stiff cloth but sturdy enough for cutting. Pay attention to how the weft fulls.
5) Draft: make the most of the warp color scheme but keep warp float to max 3?
6) Wet-finish with caution; don't want cardboard.