Even Boldrick Had a Plan

It's been a... tedious winter; I think that's the adjective that fits best. Gardening helps depression but tires me out and aggravates joint pains; many days I can't concentrate or settle down, but some days mindless menial jobs are OK. I've been living by ear, as it were, but it's been a mild one this time around so I'm not that despondent.

I haven't gardened for four or five weeks. (I stopped initially because we had ten days of much-awaited serious rain within any 24-hour period, after which I noticed my hips didn't hurt!) I've woven a little. Watched a lot of docos online. And I read a lot of short stuff on so many subjects. Today's title was a comment on Facebook on a Brexit articles. :-D

The gray warp was meant to be a double-width baby blanket, but at 18EPI per layer, the singles were too sticky. Being already 71cm wide on the loom, (slightly too wide to weave comfortably/confidently,) I couldn't resley, so I gingerly wove the top layer, cut it off, and wound back the bottom layer, to get wide-ish ordinary pieces. It's still slow, sticking weaving, but I can't believe I used to weave 74-76cm wide as a default. 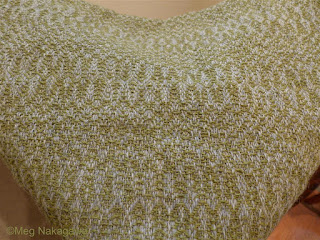 Olive green possum/merino/silk weft. It's a dark, overcast day today but under halogen lights the colors look pretty accurate on my screen. Off the loom but not washed. 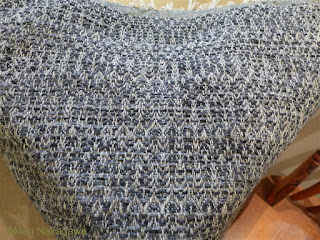 Coarser gray variegated wool in the weft, this is a warp-end fabric, possibly for yet another bag. But sampling shows it's soft enough for either the front or back bodice of a rugged vest. Off the loom but not washed. 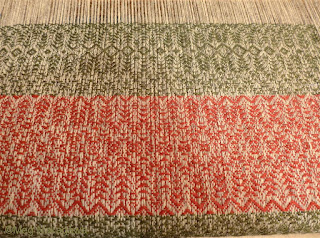 A Christmassy piece currently on the loom. Donno why this particular one is so slow going.

The bigger problem has been sourcing good light-to-mid-gray wool at a reasonable price. And I don't skimp on quality so I'm not looking for cheap stuff, but some of the prices are now well out of my reach.  I've looked in New Zealand and Japan, but they were too fine/ridiculously expensive/charcoal not light-mid/old-fashioned coarse. In fact I've started dreading sourcing good affordable wool of any kind some time ago, even in small amounts to help stash reduction. I need to research again, preferably NZ wool, but lucky I've got so much stash, eh.

It dawned on me very recently that one reason I don't feel excited about my weaving could be twill: because unless I set out to use another structure, I default to straight-forward twill. This is so automatic the connection didn't even occur to me until I was blessed with the kind of empty-headed-ness that comes with depression. So I've been auditioning other structures, picking up books, gazing at pictures and drafts, and putting them down. That I can't concentrate and read anything in depth in this case doesn't bother me at this stage. I tend to live with weave structures for a while so I can take time cultivating a good relationship. Although for me, for the purposes of the sort of things I make, it is hard to beat twill. I think.