Ben was diagnosed with diabetes on February 5, 2003. Diabetes is a progressive illness, and I always understood it to mean, "It will get worse." Around the time he's turned 50 it started to mean: what he did and how he ate back in 2003 are, 14 years later, not good enough to keep the numbers down. Plus we have been plenty complacent; my bad I trusted what he said, too; I was tired of nagging after the 10th anniversary.

Long story shorter, his numbers were so that his doc, (my old,) wanted to put Ben on diabetes and cholesterol meds. Ben's the kind of guy who prefers to suffer rather than take pain meds for a splitting headache. (His dentist told Ben he has an unusually high tolerance for pain, and we're fixing problems over two years which already presented problems in 2003 for which we had to run into a dental practice in Elgin, Scotland.) It's hard to get information from this doc, even when we ask gazillion question, so Ben negotiated and got only on cholesterol meds and an reprieve of three months to get tested again, and reassess the diabetes med. (Not to mention the head nurse who gave him the annual diabetes check knew little about diabetes but treated us like idiots.) This was on the first day of his month-long holiday.

New Zealand's diabetes policies changed in the last decade; when he was diagnosed frequent checking of blood-sugar levels by the patient was encouraged, but now they prefer to put folks on medication early, relying on HbA1c, (average blood sugar of three months leading to a test,) which is checked only annually. But as the patient and wife of a patient, that's too chancy so we've been buying test strips ourselves, (may not be so common in NZ,) and also not exactly following the officially recommended diet, but cutting way back on carbohydrate and filling up on veg. Coincidentally Ben won a Fitbit from the Diabetes organization not long ago, and the data/record appearing/kept on his laptop intrigues so much he started exercising. Quite a lot.

The doc had to change his cholesterol meds three times but the side effects were bad, (one night he told me his brain was boiling!) he took himself off. He exercised day and night and we checked blood sugar several times a day. We read more about diabetes, talked about food, cooked healthily and ate well. But in retrospect I think he was a little depressed, caught unawares, (while I thought, he could have been on meds a few years ago,) he thought a lot and didn't do much else.

On the very last day of holiday, he switched to my doc and we made an extra long appointment. Karl prefers to, if possible, solve problems with foods/nutrients and he wanted us to research one of two diets, ketogenic diet or intermittent fasting, both of which burn accumulated fat and lighten the load on the kidney and pancreas, among other organs. The latter is what he recommended me two years ago when I switched to Karl, but I I couldn't do it while cooking for Ben as well. He also gave Ben another cholesterol med, (to which Ben reacted badly, so he took himself off.) But the sane news is, Ben's on a one month parole, to be tested early Feb and we'll go from there.

The last two weeks we've been reading even more, while following the kitogenic Blood Sugar Diet loosely, because I already had the book. (I got it a while ago meaning to go ask Karl if this would work for me, because this I could do with Ben after I convinced him he needed it.) It allows protein and veg except potatoes, some full fat cheese, milk, and yogurt, but very little fruits and no carbohydrate. And we love it because the science makes so much sense to us, and because protein is allowed, Ben got over his initial resistance. And it's not a hard diet to follow; eat less energy so stored fat is used.

Ben's lost 4kg, his body is better-toned, he is motivated, and his numbers have been consistently better than anything in the last, at least, four to six years. Me? I may have lost 500g. Or not. It's like when I reacted to chicken and had nothing but water for seven days and gained 500g, or when we went gluten-free and Ben quickly lost a few kilos while I did not. My gym staff said I was an enigma, but I fill up faster, eat less, and don't get cravings.) I'm looking forward to his Feb numbers.

Karl's very knowledgeable and it's hard to take in everything he says, but I did take notes and got the important bits. It annoys me Ben remembered bits just listening, but it's great he is taking this seriously. Additionally, we got one supplement each, Ben's got new shoes and those sporty sandals, and both of us, Swiss ball cushions. And we're recording everything that goes into our mouths in... prepare to laugh... matching notebooks! 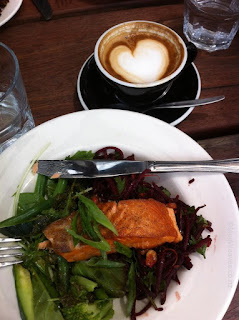 At Saturday lunch at the Suter with JB and Ali, Ben shot his food with his phone, and it dawned on me I could do the same with mine rather than try to memorize and write at home.

No gardening, no big clean up of any room, no long drives, no movies in the cinema, one lunch in town in a whole month of holiday. We didn't even ring JB and Ali in spite of my warning before the holiday started. All life is good; it's good to reassess periodically. And if you're curious, eggs are good again, and salt may not be as bad as previously thought. And caffeine isn't great.
Posted by Meg at 1/18/2017 04:55:00 PM