I've been trying to read books about art, artists/artisans, textile, weaving, but I hadn't been able to stick to any for ages until I came across a Matisse book I bought in Brisbane. It's about Matisse and modernism, and the text is in that convoluted, old-style art writing, but for some reason I'm enjoying it, albeit in small doses. I've done marginally better gazing at pictures.

I have been talking to friends about how I could continue weaving, knowing my technique sucks; Finn, Lloyd, Thomas, and, oh, Stella again and again, and of course Ben. I know what I don't want to do now and that is to move into "textile art", however one defines it. I know what I don't understand and that is "to make a feature" of my bad technique. Otherwise we spoke of changing my POV, deconstruction, mending, ornamentation, and a few other things I should have written down but I didn't. I felt a little disingenuous at these times because I was speaking entirely from my head, as if it was all someone else's worry.

In fact, I find myself not as enthusiastic about anythings compared to how I have been all my life, not passionate, not even biased or partial the way I think I've been all my life. It's not all bad because I've long worked to becoming more composed and analytical, so if it's working that is good news, but it could be aging and not caring, and that's a harder one to take.

At this point I've got mixing colors, making fussy/unpredictable/irregular patterns, and using textures to obscure technical booboos to some degree.

While talking to Stella before Melbourne, I knew as we spoke I wasn't catching the full extent of her advice, and I told her as much. I wasn't taking notes and hoped with enough time to regurgitate I'll discover I understood more. When I came home I couldn't remember much of the important stuff, but I learned something I might have known for a while: when I listen to advice, especially when it involves something new to me, I visualize cloth that includes that new element, like my weaving USB stick. And I remember exactly when I started this, in the afternoon of the Art Expo ten years ago when I was bored out of my wits with no galleries/shops interested in my work. I knew I needed a way to hold visual information, which was new and foreign to me then; now I need another way to store conceptual/ephemeral information.

On Wednesday, I went to see a film on Matisse with Jean; she has the ticket stubs and I don't know the title or the production year, but it was in a doco-style, with no actors playing his or anyone's part. It showed places he lived/worked superimposed on his paintings or vice versa, fading in/out, and the narrative was a composite of his letters, almost all complaining about money. My word, he was as constant a whinger as Vincent or me on the subject, and the overall tone of the film was unnecessarily depressing.

Often we only saw details or portions of a painting, and there was nothing, for example, about the "movement" that were Impressionism or Fauvism, not much about his friendships, or the many deaths of loved ones. As far as films go, I give maybe 6 out of 10, but I had an experience I hadn't in ages, of my body recalling the motion/sensation/emotion of weaving on my big loom, in reaction to the visuals. That's another "normal" I'd forgotten for give or take a year; I used to get this rush whenever I saw certain kind of visually pleasing films, to the detriment of not being able to pay attention to the film itself and wanting to go home right away.  On Wednesday, I had a full afternoon of errands to run, so I couldn't. But I was pretty sure the weaver in me was back, at least for the moment.

I threaded and started weaving this warp before Ben brought home the aforementioned workplace germs. It was meant to be the first of three quick cashmere warps for small pieces, to top up the Suter shop; the new shop space and new shop manager's style of displaying textiles suit smaller pieces best, and as of Wednesday there is only one left. 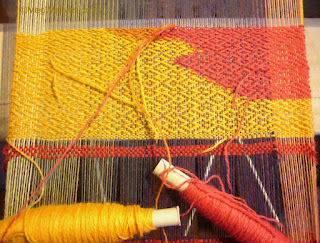 I started with one weft color per piece in mind, to whip up between nine to twelve quickly, then I got sidetracked and started mixing things a bit and needed Pat's help, (from which side to introduce a third color, and it turned out I cut and change the direction of the second color first!) feedback and reassurance, after I knew I was no longer contagious. And in spite of what I said about writing diluting ideas in the last post, writing/talking help me fine-tune my plans at the execution stage. I'm going to make a series with extremely bright, extroverted, "look at me" weft colors, although whether I'll mix weft colors in all nine-to-twelve will be known only when I finish the last.

Pat thought, well, I don't know what she thought, but in effect, "typical" of me to go for a not-straight-forward treadling. I've woven this before with one shuttle, which wasn't that hard, but then she left and I wove and half a dozen rows on I was lost. And it's 47 picks per repeat, (not 48+1) so I thought best to prepare a color-coded "you cannot miss it" treadling printout before I go unweave

The picture above is not under tension. I "made" all three warps with 130 ends, but while threading I discovered this one was missing 12 ends, so the light green end at the left requires a bottle of disinfectant hanging from an S hook while weaving.