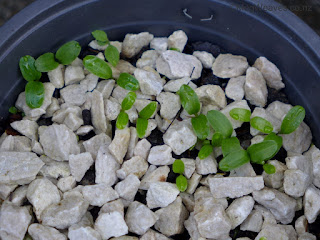 Day 33+16+22, June 4. (Text and pic on Day 33+16+23.) My most favorite plant for the last couple of decades has been hellebores, although I have a dozen close-seconds. I have two deep purple-gray singles, the color usually called "slate", with which I'm completely smitten. My original source in Southland has more some years, none some years, but quit offering the smaller pots I used to buy. I can't dig holes big enough to fit the large pot plants where I know they will thrive. (And be with other slates, just outside my kitchen window.)

So over the years, I've collected self-seeded babies, transplanted them in good positions or pots, pollinated and sowed seeds, as well as bought seeds from Europe and Japan, all to varying degrees of "dismal". It's partly because hellebores take so long to germinate/flower, hybridization by pollination is unstable, but also because slates yield so few seeds, self-seeders don't survive, and I wondered if they are bred to be sterile.

Like many seeds, these are best sowed immediately or as soon as harvesting, which I did, undeterred by past failures, in spring; kept them in the shade, watered them all summer. I haven't read they need the cold to germinate, but what did I see this morning? They suddenly popped up, and this year they're doing better than their reliable pink sisters.

All morning I wanted to keep chomping at the agapanthi, (I'm sticking to my new word here,) because the sun was out at the start, but it got darker, and it started to rain as forecast, and by evening we were startled by multiple instances of loud noise as if someone was dragging a huge American metal dumpster up the hill. Until we realized it was thunder! We couldn't see any lightening, but found out folks were enjoying gazillions to the southeast, the very direction we can't see over the hill just behind our house. By the time we finished dinner, the sound had subsided. Gosh, darn. 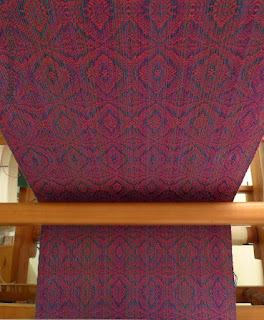 Day 33+16+23, June 5. Here's a view perhaps only weavers appreciate; I'm looking up from underneath the cloth, where my legs are when I weave. We're looking at what I've already woven, though perhaps you got that.

Today I wove another hour and a half, one half repeat, 704 picks, 65cm. With this project that's about all my eyes can take in one sitting. But because I'm not in a rush to get more done, maybe it will be well-woven. The selvedge looks OK. But then most of my pieces look OK at this stage, so we'll find out when the piece is washed.

We had glorious sun today and I really wanted to keep butchering the agapanthi. I went outside after lunch to walk around in the sun, but the ground was not only squishy wet but Ben thought it'd be slippery, and although I'm not working on the steepest part, it's still a tricky slope where I have to contort myself to accomplish what I hope to do, so I wove instead.

New Zealand had our 14th day of no new and one remaining active cases. Even Jacinda's prime ministerial visit pics don't adhere to prescribed physical distancing. Some of us are cautiously optimistic; some of us have lived in "what-physical-distancing?" mode for a while.

Minneapolis had Mr George Floyd's memorial. There have been lots more details coming out, about Mr Floyd and the four policemen, confirming nothing is as simple as I'd like the world to be. People in the media say this time it will be different; I can't be so optimistic. Also true, I never imagined Minneapolis to become a microcosm of the current America. There is the Plague still kicking and screaming in the US, not to mention the "usual" but accelerated disregard for law and tradition by those in charge. Friends, do be careful; do not be afraid to nag your loved ones to be vigilant. If that fails, you yourself be careful.

From time to time I'm unable to take good pics or write a summary of the day for my Plague diary, and worked on it the next day. For the first time this week I didn't post two days running, and I wondered if I was un/sub-consciously sabotaging. I hope not because shooting pics today was particularly fun. I've had sleeping problems and my days have been are muddled. Perhaps I was just cranky. So, seeing as it's extremely likely we'll move to Level 1 sometime next week or the Monday following, for somewhat of a symmetry, I'll keep going until then. Unless I change my mind. 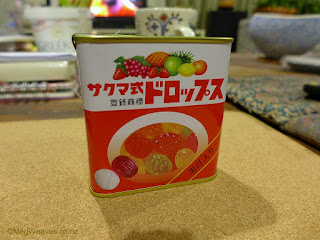 Day 33+16+24, June 6. A huge-for-Nelson Asian food store opened about a year ago. We go periodically to stock up on few staples. From the writing on the packages, we think a Korean family owns it, but it also carries plenty of Chinese and Japanese products. At the check out are few treats, among them this hard candy in an impossible-to-open tin. Apparently two companies by the same name had similar products, and I've seen 1908 and 1913 cited as the start of these.

Dad had one of these tins in his bag or desk drawer from time to time. Dad did not have sweet teeth, but he was a heavy smoker who had to talk a lot for work, a teacher, so when his throat got dry, he'd get a tin at train station kiosks. And whenever we found them he gave us one.

We resisted picking this up for a year but today we treated ourselves. They still taste the same - nothing extraordinary, just sweet, hard candies in different colors but the same taste - but the tin looks oh-so-much smaller.

Ben just told me there was a small BLM gathering today in Nelson. Had we known, we would have gone, but instead we contributed to the local garden center, Asian food store, and supermarket economy. The only discernible social distancing were floor markings and sanitizers in stores. Though we carried gloves and masks in our pockets, even I forgot we had them. And though we left home prepared for military-style food acquisition, we simplified our process: we washed all veg and transferred protein to our own containers, but we didn't wipe packaging, but just left them in the basement to rest for a couple of days.

The comment sections in NZ media's coverage on BLM are divided, vicious and ugly in some instances. Needless to say, I'm a little scared showing up in public places taking a stand because I can't run fast any more. If just wearing a mask entering a store can solicit horrible reactions in little old ladies, (last week, not today,) I'm not sure how I'd react facing vitriol in a gathering, although, also true, these gatherings in Nelson always take place peacefully. But we would have gone had we known. 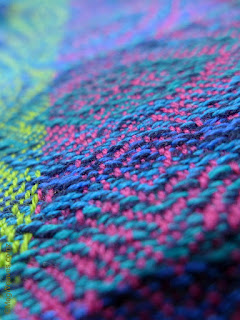 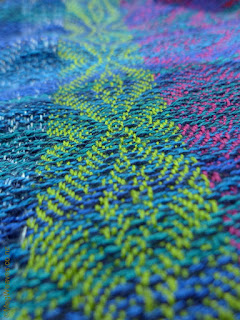 Day 33+16+25, June 7. Today I wanted to weed and weave. Undecided, I dithered in the kitchen in my weeding gear, and ended up weaving. The funny thing about weaving is, some days my brain goes into overdrive while weaving, and I can't stop it from coming up with gazillion ideas. Some days it's future weaving ideas, other days it's a story idea, and yet others, it's endless To Do List items to add and edit. Today was weaving ideas.

Some days I have to stop weaving and write them down. Today I ignored them but my brain kept working on three projects at once, doing the math and making up drafts, ignoring me and the weaving in front of me.

I also noticed, perhaps for the first time, this happens when I listen to familiar music. Which explains why I haven't experienced this for a while. I've been listening to podcasts and audiobooks, (two birds one stones, I thought,) so I'm too busy trying to understand what I was listening to. I don't know which is better; an overactive brain can get super annoying. But for now I'll stick to music.

I almost set for another warp in this yarn combination and sett, good idea for the narrow gold cotton warp, and some options for the wider gold cotton warp. All variation on a theme, so similar to each other, but different enough. I'm happy for now.

Day 33+16+26, June 8. Today I got out of bed resolved to tackle the agapanthi, but wanted to find out the time for Jacinda's announcement. I cleaned the kitchen, finished one opera, roasted beetroot, but couldn't find the info. At 1.30PM, I read my nemesis will have an announcement at 3PM, but it did not mention Jacinda, so I assumed she's on at 4PM, her somewhat usual time when Cabinet meetings are involved. That would have left me only a couple of hours to work outside if I wanted to get out of the shower by 4, so I wove. 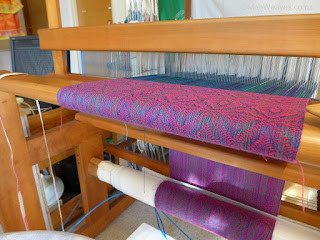 Usually I try to shoot my weaving when I'm finished for the day, in late afternoon or evening, under artificial light. When I got off the bench to stretch, mid-afternoon, I saw a good angle to show off the warp colors and simultaneous contrast with the weft in natural light. I finished this piece, and got the next one set up, but I want to alter the draft/pattern, and it was 3.45, so I thought it perfect time to resurface and watch Jacinda with Ben. 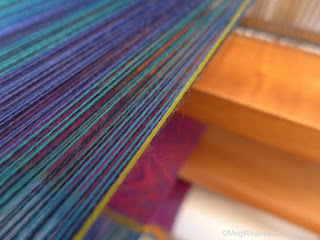 Next piece will have a light yellow green weft seen here at the edge. On it's own, it's a somewhat shouty color, but the interaction with the weft colors are sublime.

But, gosh, darn, Jacinda spoke at 3PM, with my nemesis! So As I type I'm trying to listen to a recording. If you'd like to watch the start of her delightful announcement, I attach a link. But don't bother with the media questions; they are usually repetitive and uninformative, and I think I finally heard Jacinda says, "Ugh."(Skip to 16.50.) At the end, she thanked us.

After 17 days of no new case, New Zealand has no more active case and as of midnight tonight, we are moving to Level 1. As far as Ben and I are concerned, this means life back to normal within NZ. Borders remain (conditionally?) closed and flights scarce, but otherwise this is the end of Plague, (although there may still be new cases popping up.) Ben will resume working at school next Monday. He had put in a request for Wednesday off and we have to rebuild his work setup on the weekend.

75 days on, I'm also concluding this Plague diary*. Thank you for sticking by me. I wish the rest of the world speedy normalization and light heart soon.