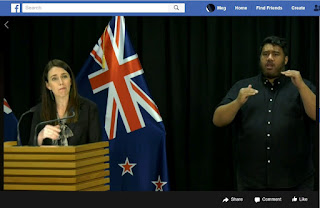 On Day 102 of no community transmission in New Zealand, yesterday, one Auckland family tested positive; Auckland Region went back to Level 3 at noon today, the rest of us Level 2, until midnight Friday or until further notice. Ben and I tried to recall what Level 2 meant; Level 4, the most restrictive, is easy to remember, but Levels 3 and 2 were shorter and not as clearly defined, we were in them for a shorter time, and Ben's work had further stipulation. I'll leave Ben to tell me what/how to do this; I'll just cook and weed, again.

That 100 day mark must mean something, either to the virus or human psychology; Viet Nam had a positive on their Day 101, remember?

Ben started working from home this morning, but his computer at work assisting remote access from home had a problem, so he went in to fix that, and stopped by the supermarket. He said the bigger already had a queue, (they are more organized, I think,) but the smaller, our preferred, had none so he picked up a few basics, and potato chips and chocs, on his way home. We learned from the last lockdown Chez B&M has enough dried beans and frozen... 1/3 bag of squids, no shrimp this time and rather little veg... that we'll be OK at least until the end of next week. Although fat and juicy humble onions won't go amiss; I just started a grocery list, something we seldom do but became a routine during the last lockdown.

Our return, (and I didn't think of this when Victoria went back, where we'd so love to visit again,) to living with Levels made me think of a discussion had with friends, and I'm asking myself a question hitherto completely heretical, but here we are. While I'm all for precautions and quarantines to protect us now, when there are whole communities uninterested/against prevention/eradication of Covid 19, when travel is so easy, and when... (Oh, I do hate to alarm you but, again, here we are,) viruses have been found even on frozen food packaging originating in South America, stored in Asia... if we seriously hope to not have Corona in New Zealand, we'd have to go into a semi-permanent border closure and import ban, don't we? And we don't know how many sleeper cases there are. So... in a way... what's the use?

And that's coming from a person among the least affected by seven weeks of Level 4 in all of New Zealand.

On the other hand, I'm amazed how much Kiwis travel. In the said Auckland family where four members tested positive, two were in Rotorua visiting family/friends and tourist attractions last weekend. With symptoms. Very early on there was a couple who tested positive and the female visited Rotorua a week after returning from overseas while the male went to a big oncert.

So Ben and I are as "homebodies" we they come. I know there is a big push to promote travel/tourism/local businesses. I also know one of the authorities in Otago University never liked the too early promotion of domestic travel. (Our borders are still closed, except to returning Kiwis and business folks with special dispensations, like film crew and yacht race peeps. Don't get me started on them.) But... heck, my mind is bent.

I've been spending much time weeding; I'm not finished with the agapantus, have started on a couple of other areas, but moved on to more time/season-sensitive areas. Yesterday I abandoned all else and hunkered down on the hellebore area. In the evenings I've been obsessed with that weird knitting, and unravelling. I found both pleasing and surprising within 12 hours my head is totally back in the lockdown mode; I can't explain it, but I'm both distracted and super-focused at the same time. This morning I have been in the kitchen, looking at the screen for most of it, planning meals for the next few days, looking at the weeds I was going to pull out today and yet immobilized to do much else but to wait for the 4PM announcement/update.