Hello, Friends.
I prepared this post to publish sometime around March 1 on what I've been up to and how Covid was looking in New Zealand and Nelson, but the situation change rapidly, as you might remember from your own areas, so I didn't see a good window to up the update. All in all, life is going to drag on as it has for a while longer.
Weather/Garden - Not a whole lot done, but some, which is OK for this time of the year. February is usually the hottest month, but Nelson had a cooler-than-usual summer; I felt lazy not going outside more often, but we went out two days in a row in late Feb and both suffered from mild heatstroke. Come April, though, it should cool down, and I'm working hard to try to get exited about the prospect.
Weaving - I did finish the orange sample warp sometime in Feb, but the last two were woven badly, and I didn't get the Old Wallpaper look. I'll address it another time, but a big problem has been I can't see 60/2 cotton in the warp, and they broke left, right and center. Raw came and went, Changing Threads about to open. I'm disappointed I didn't finish something, anything, but am still keen on making something in that Old Wallpaper style eventually.
Ben noticed the air compressor leaking, so for now the big loom is out of commission. I'm not going to get it repaired while Nelson's Omicron cases is still increasing. 600 new cases in little old Nelson/Marlborough today, though testing numbers have been unreliable and there are probably lots more. I still intend to weave Sunflower II as a scarf, and then three short cashmere warps on the Ashford in simple but friendly twill to make simple and friendly small scarves. Though the loom has sad in the middle of the living room for a month now, with said warps hanging from the back beam. These will happen.
Cooking - this was my primary mode of "making" until March; I didn't bake for a long time because neither of us have had any success in even the slightest weight loss, (usually easier in the summer,) but I'm more deliberate in flavoring and been able to make yummy meals. I'm rather proud I can make curry without prepacked spice mixes; that has to be my biggest Plague achievement.
The last fortnight or so I baked a couple of cakes again, but with so little flour and sugar it's not as bad as some of the baking I did last year. On the other hand, pasta returned on our table. which of course we both love. If I don't watch out, Ben will have it several times a week.
Mary Ann Moss' Sketchbookery and her Blog - More on this in another post, but this has been what kept me sane during March. Blind contour is still hard; blind not a problem, but contours in single line requires a lot of concentration, and I can't slow down. When I took life/figure drawing, my favorite was gesture drawing, and what I do now feels like a hybrid. But slow contours really make me see and notice, so worthwhile when I manage to do it right.
Practicing using watercolor has been great; not in the way you might think of traditional water color paintings, but as means to apply colors. I've colored in a whole lot of past gesture drawings, but I've run out, so good time for more contours when I resume getiing out and about. 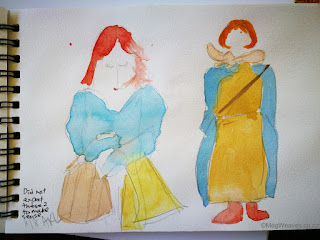 These were quick gestures I did at Auckland Airport some years ago. My gesture drawings are usually done in 2, 3, or 5 seconds, because, you know, they are strangers going about their own business. I try to capture them in the moment. What's been fascinating is I can seldom remember what I drew, the lines seldom make sense, but by coloring in, I gradually see the pose, the shapes, garments, props.
Plague in New Zealand - Ben resumed work at work on January 11, thus ending our 2021 "lockdown". That didn't last long, because on January 24, due to community spread of Omicron in Motueka, 20 minutes northwest of Nelson, whole of New Zealand went into Red on the Traffic Light system. After nine days in office, Ben was back to working from home.
In the two months since, the number of community cases, hospitalization, and deaths have skyrocketed in New Zealand and Nelson, while most rules were eased/removed, i.e. who needs to isolate for how long, border isolation requirement, etc. Today it was announced contact tracing, some vaccine mandates and vaccine passes will be scrapped. The traffic light signal will be modified o accommodate masking. Some observers put the timing to "Auckland having passed the peak." I don't know further details because I can't stand watching and listening to the players, but in most parts of the country, the peak is yet to come.
We had anti-vac/mandate protest activities around the country, but a particularly large and long occupation in front of the Parliament in Wellington, from memory for around three weeks. What surprised me was the media coverage focused on how to accommodate these anti-people because NZ is not divisive. Huh?? Some say they got what they wanted.
The government has been ever so uninterested since the arrival of Omicron; shortly after it arrived, politicians on both sides went on a long summer holiday, so we heard only from medical experts, and local health boards. You might have seen data from Korea, China or New Zealand not having had high casualties earlier in the Plague hitting high numbers of late. I can't speak for other countries but in New Zealand, it's been a spectacular change in direction, though the same people are still in charge.
For rule followers, it's been puzzling since early/mid-December. Suddenly grownups left the room and we were left to fend for ourselves. So we stay home. In more or less Level 4 style. With the increase in numbers in Nelson, (and for the very first time, a family we actually know in isolation,) we don't go anywhere except for absolutely necessary food and medical purposes. Around January we wondered if we were being too cautious, whether we should "get back to normal" like some folks were advocating, but I can't be bothered learning about how to live differently while "living with Covid", especially with a diabetic, when case numbers are so high. So we stay home. There are, according to the media, folks like us, particularly in the older generation.
Luckily we can do this, financially but also re. our social obligation and personal preference. I can't get rid of the foreboding sooner or later we'll have to bite the bullet and go out even with plenty of virus floating around, but not now. Meanwhile there is a low-level depressive mood and my insomnia is out of control. With the latest changes to the rules, Ben is wondering if his work will require him back "at work"; you will hear me scream if that happens. Oh, I wish we had enough money so he can retire if that happens, but for now we're sticking to out own rules.
I hope you are doing well, or as well as can be expected, Friends. And be careful. Some say BA. 2 is 30-odd % more transmissible and as dire as Delta. We'll see.
PS. I'm not ignoring the war in Ukraine, but that's even more changeable than Covid. In the last few days, I've begun to feel much less optimistic as regular people die. Every time I check the news, I feel like screaming, "Word is Cheap!!"
In terms of donations, I've opted to give directly, and after failing to find a suitable Air BnB owner, Gail suggested we turn to Etsy, so I bought some baking (!!) recipes from Julia at Orchard of Dreams.
I added a wee message when I made the purchase, but imagine the surprise when I heard back!! I hope it also meant she received my tiny contribution.
Posted by Meg at 3/23/2022 09:35:00 PM