I Used the Wrong Weft!! 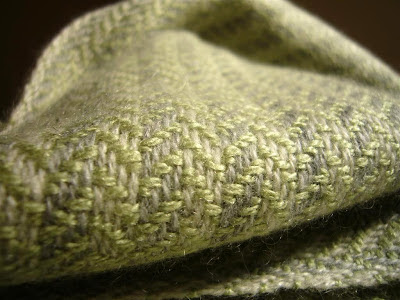 I thought I was weaving with a yellow-green 100% cashmere yarn, and though the cloth took on a blueish color on the loom, I thought it was because of the two grays in the warp. I thought nothing of it while fringing, washing or pressing, though the texture did feel slightly stiffer, and the green weft shone more than expected.

It wasn't until I was fishing through my cashmere box that I noticed this cone was labeled incorrectly, and then realized I used the melon-glacé-colored cashmere-silk mix instead. I like the contrast in the sheen, and the way the silk-mix sits slightly above the cashmere warp to show off the weave structure.