Peg doesn't believe I'm weaving 160EPI. To tell you the truth, neither can I; it sounds too crazy for me.

I uses cottons sold as 2/60Nm in size from DEA Yarns & Fabrics in Levin, New Zealand, even though their URL resides in Australia. I don't know if it is the same size as what you call 60/2. A while back I was told 110/2 for wool is a New Zealand-only specification, and so I stick to my vendors' descriptions rather than translate into international standards in case I get them wrong. I don't teach nor write articles, so as long as I can figure out suitable setts/picks, it doesn't matter to me what they're called. Unless you think we're using something similar and have specific questions, and then I lift my unsmall tush to try to find the Interweave book on yarn sizes I bought ages ago. Which I can't do now because half the living room resides in my stash room.

I have 16 ends in each dent, and this is a 10-dent reed, and I know this because I own only two reeds that are approximately the weaving width of my two floor looms, 10DPI and 6DPI, and I found the 6DPI, spacier one leaning against the wall on the side of my 2/20 stash the other day to my shock and horror. 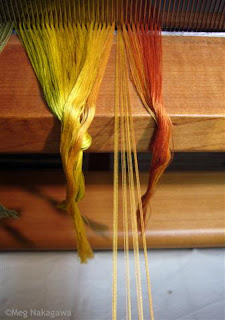 And this is the best of about 20 pics I tried to show the ends. My hands just won't stop shaking after a day of hard scrubbing. 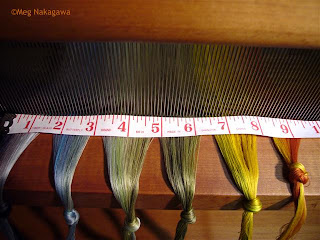 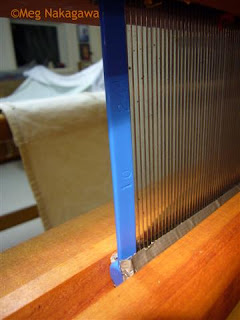 Meanwhile the second sample didn't come out as nice as I had imagined; it looked oh so much better on the loom, but hubby reckons it's good to go. 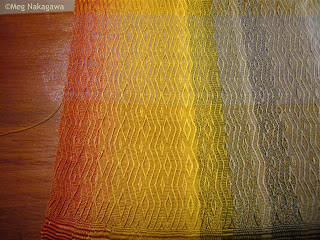 I can't help you any more, Peg. I've been high on Mr Muscles oven cleaner this afternoon, and reckon there'll be more of the same in coming days, with washing the walls, painting, Ben varnishing, and Universe only knows what else.
Posted by Meg at 4/10/2009 07:11:00 PM