It's been a strange project, this cotton warp, but yesterday I finished weaving one piece. While weaving, prompted by an off-line correspondence, I was thinking of how a series of opportunities/deadlines, perceived restrictions, and mistakes culminated in this (and hopefully two more) piece. So this post is more for me as a record than for you to, ummmm, be enlightened or entertainment.

I tried to be more daring color-wise for the Bye Bye Blue Eyes warp. (I do wish I had better pics from that wall!) And though it required a lie down at one point, I was able to mix more colors than before in the fourth, last scarf, by way of supplementary warps.

I decided the next warp would be in 2/60 cottons, in all the colors I had (pic at the bottom). I omitted white and pewter from the lot, but managed to include everything else, arranged roughly in hue gradation, though in a couple of places I deliberately planted "out of place" cones. No plans, logic, or fancy ideas, but mechanical placements, more or less, to get as many colors as possible. I didn't think about values, but I took that into consideration when I bought the cottons, so the cooler 2/3, particularly blue/gray 1/2 of the warp looked harmonious (is that the word?) anyway. I also intended to edit the warp with supplementary warps to add zing.

This Award seemed an appropriate platform to try my thing: for this, I had in mind a somewhat open weave in three or four pieces hanging loosely from the ceiling like a floating lampshade with a light placed on the floor pointing up inside the "lampshade". Colors and movement during the day; shadows at night. The colors were supposed to signify the changing light from dawn to dusk on a summer day in Nelson, except the spectacular purples at the end of the day, the cones for which I couldn't afford.

I was also investigating what is meant by "concepts" in "textile art", but as is the way it works for me, I started to see the finished piece, so I followed these fragmented pictures instead.

I imagined the weave structure to encompass crammed and spaced areas, and for these areas to flow from top to bottom, from left to right, so the eyes follow the color and structural changes naturally, rather than the two to fight each other. To this end, I imagined the threading and the treadling to advance, but I was mindful I had 1500+ ends, and 1548 heddles, so the threading needed to be evenly distributed. In the end, the number of heddles determined the threading.

I was in a hurry to start weaving, so I decided not to "edit" the warp, at least for the first piece, and the pieces bacome narrow stoles/wide scarves, not an installation.

After the first sampling, I saw my simpler drafts would suited the warp color changes better, and this was confirmed by Geodyne, and the draft became simpler and simpler. I was puzzled by the hand, the elongation of the draft and puckering of warp floats, until I realized I used the wrong reed and the warp was sett much closer at 130EPI than the intended "slightly closer than balanced" 96EPI.

Yesterday, I just went ahead and wove a scarf; it is just off the loom unwashed. 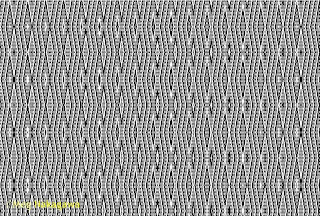 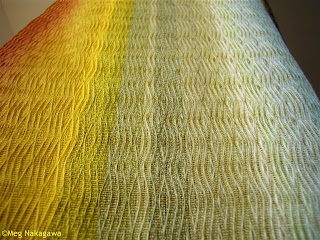 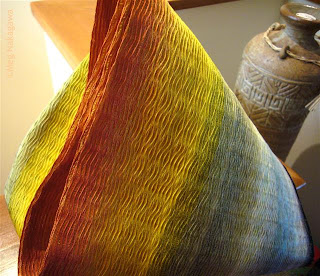 The draft is the same as what is seen in the sample towards the top of the pic here, and the weft is blue yellow of the same size. I expect puckering in the wet finish, and softening of hand.

I'm trying to come to terms with the simplicity of this draft (point threading/treadling in a 4-4-1-1-1-1-1-1-1-1 twill) and its relative effectiveness, particularly in comparison to my fussy/geek drafts. Though this is far from what I consider to be that thing I call "inevitable cloth”, it feels a tad closer than any of my previous projects, which in turn makes me feel a tad maturer as a weaver. But I feel guilty/disappointed I didn't arrive here deliberately, like I missed out on the journey.

And I still like my geek drafts better. I think this means if I want to continue weaving them, I need to simplify colors, but I'll worry about that after I finish this warp.

Dear Correspondent Friend, I hope it answers some of your questions/musings. The yarn is sold as 100% cotton. As you can imagine, the twill looks the same on both sides; I've created and sampled lop-sided drafts, but am not sure if I like them at this point; their hand is better.