We watched a documentary on discovering the remains of the hitherto biggest sloth in Brazil. The Japanese term for sloth is literally "the lazy one".

My weeks has been like that. The weekend was spent on housework, then I finished a very uncooperative warp I neglected for six weeks. Finally. It should have taken one afternoon, but it stretched over two. Or was it three? I've been extremely tired for no good reason.

Yesterday was Week 4 of 5 of the pattern making workshop; I do love the workshop, but it goes on until 9PM, and all the discussions and knowledge keeps me awake, which I don't really like. After this stage, we have the option to sigh up for Stage Two: Skirt Block, and this is where real life measurement comes into play, most worriedly mine. And there is a possibility we get into pairs and measure each other. What if I get one of those oh-so-cute-and-skinny high school student as a partner? And the other "oldies" aren't exactly shaped like me, either. In short, I haven't committed myself to Stage Two yet, but because I am shaped in such a ... an unconventional, squashed beer barrel shape, I do feel I must make the effort to look descent. And handmade clothes, if I use nice fabrics, will last longer, too. I think. Oh, what do I know.

This morning is drawing. Then this afternoon I will go see "The Last Station" with Joan; it's a treat to go see a film about Tolstoy with a writer. Tomorrow morning, we leave early for the Marlborough Weavers meeting, due to start at 10AM: it's about garment fitting. We'll stay the night because it's the start of Ben's two weeks off, and come back on Sunday in time for a lecture at the Suter by the editor of Art News New Zealand. And then on Monday, I have a lengthy, un-fun dentist appointment.

Meanwhile, I do have plans on/about/around the loom; one is to use up a lame (more explanation later) warp on the table loom, and a few ideas/warp chains are fighting to get on to the big loom, so I need to prioritize.

Have a good weekend if I don't talk to you until next week. 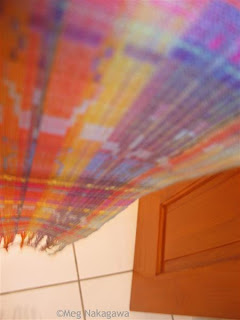