I couldn't decide what I wanted to do today.  Specifically, I couldn't decide if I wanted to put on a two-color cashmere warp, threading undecided, or Ben's Happi warp, not sellable, on the big loom.  I looked at my four-shaft Jack.  The poor thing has been neglected for much too long; I don't have a record, but I put on a black-and-gray alpaca warp in log cabin sometime between October last year and February this year.

I'm not a fan of alpaca; my face and arms itch, ergo the long neglect; there's no "expression" on the yarns; I imagine this is what it's like to weave nylon cords or horse hair.  And there is absolutely no joy of wet finishing alpaca, and the small problem of absolutely no disguising bad selvedge.  Still, I don't want to take off another  partially woven warp off the loom, only to have to resurrect it again, so I continued to weave a small scarf I started on April 8. This year.

I'm still skeptical about this piece as a scarf, to be worn around the neck and face, (certainly not by me,) but color & weave fascinates me.  It's plain weave, but it looks three-dimensional.  At first I kept making treadling mistakes because I was lost in the maze of the vertical and horizontal stripes.

After a while the treadling became automatic; because of the massive size of the yarns, the weaving is super fast, and I was enjoying myself quite a bit.  Plain weave, though with two wefts, and this result.  Log cabin is one of the most energy efficient weave "structure", yes? 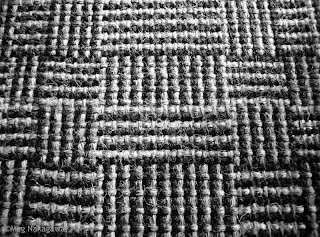