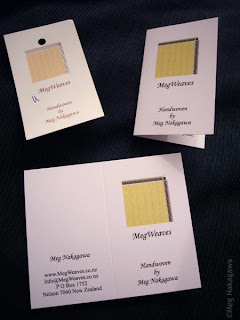 In September, I was sickened by the look of my homemade tags having faded while my pieces sat in galleries, so I got new tags. They look almost the same as my old ones, because I wasn't looking to rebrand, and I like my logo and the simple look of my tags. What I did change, (besides having it printed professionally so they don't fade over time or wash away with water), was to double the width so I can fold it in half, and if the spirit moves, write a wee bit about the piece, the material, or the inspiration, inside; if I'm feeling particularly inspired, I could even insert pages to make a wee booklet. I didn't set out to copy The August One's tags, but it's the same format, only shorter and fatter, i.e. the equivalent of two standard business cards. Half of these have my contact address at the back for when I sell directly; half without for galleries.

The color of the logo itself, I changed a little bit. Way back, sometime between 2003 and 2005, when I decided I would like to sell my work, I needed something to write care instructions on and I made up this design and printed on printable business cards. Initially I had pale blue-yellow warps and dark gray letters, and I love it. Over the years we went through three ink jet printers, I think, and with every printer, and every ink manufacturer, the colors printed differently requiring modification to the files.  One time, when we had a faulty printer, (which the manufacturer eventually replaced,) the yellow came out soft orange, and I liked it so much I changed the file to orange. And the letters became just black.

I changed it back to the original yellow this time, partly because I wanted to go back to where it all started, partly because in the test print the yellow sample looked so much better than the orange, and partly because I think of my yellow/gold warp cotton pieces as my "signature" pieces if I was ever to have such a thing.  I was astounded by the details that show up in the professionally printed version; if I look close enough, I can even read the numbers and the threading and such. And the logo was kept the exact same size as before. 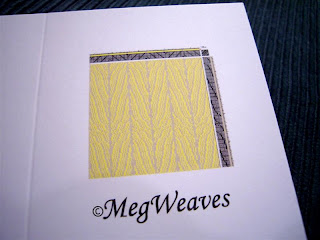 I considered Moo cards, and other less expensive Internet options, but in the end I went local, in a small part because I want to support local businesses where I can, but mostly because I am a control freak and I wanted to see exactly how it was going to turn out before I went ahead and ordered some number of these cards. In the end, a young chap named Ryan was in charge of my order, and at first I even wondered if he was out of high school, but this young man had an uncanny ability to pick out what I wanted when I mumbled and changed my mind and generally droned on thinking out loud. Amazing.

They came out less than 36 cents a piece, and though I don't know what I was expecting, it doesn't sound too bad, either.

One of these days I need to weave this draft.  It was one of many I made up while I was trying to get used to weaving software in preparation for Bonnie Inouye's workshop in 2002, and based on tulips, which is one of my sister's favorite flowers.  If I were to weave it, however, I'd change warps separating the tulips back to pale green of some description.
Posted by Meg at 11/15/2010 12:50:00 PM