In a Nutshell, or a Stew Pot Full of Them

I don't dye like many of you, in the way one is supposed to; dyeing for me, so far, has been akin to finger-painting.  So with that in mind, I've done a couple of dye experiments lately I want to reflect upon. 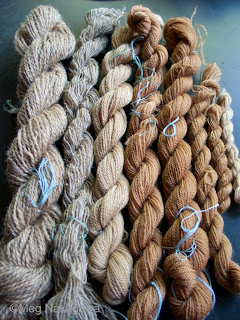 When Doni visited Nelson a little over a year ago, among the plethora of delicious knowledge she shared with me was that green walnuts a) don't require mordants, and b) produce beautiful grays!  I immediately set out looking for a walnut tree or a friend with knowledge of one I can access, but the most reliable mate is a sheep shearer and he was away, and in the end I found none.  Mid last year, Win Currie gave me some walnuts she picked at a park near her house, so I saved the shells thinking it may come in handy at the India Flint workshop, to which I ended up not going.

Over the weekend, I thought of dumping them on the compost heap, but changed my mind.  There was a good chance the brown shells won't require mordanting, right? Here's my haphazard-ous method:

a) I put the shells it the pot, filled it with water enough to cover them, and brought it to a boil; drained and discarded the liquid.  I don't know if this is a standard thing, but in Japan, the first boiled liquid is always discarded, I am told.

b) I then put in the same amount of water and turned the heat to medium low; the liquid came to the boil and was left at a gentle boil for about 20 minutes.  I used a small portion of this liquid for Dye Lot 1; the skeins were gentle boiled for 25 minutes.

c) I reheated the pot and simmered/gently boiled for another 2 hours then drained the liquid.  I lost a little liquid to evaporation and the liquid was the darkest.  This was used for Dye Lot 2; this lot was simmered for over 45 minutes.

d) I left the shells on the kitchen counter; unbeknownst to me, Ben put the shells back in the pot, covered them in water and set to simmer.  I'm not sure for how long it was "cooked" but this was a much paler liquid; this was used for Dye Lot 3, and yarns were gently boiled for 45 minutes.

e) I made tiny skeins of different wools, soaked them in a solution of eco-friendly dish detergent for a short time, squeezed them, and dropped them into the different pots and cooked for the length of time stated above.  Afterwards, I waited until the liquid cooled down and rinsed the skeins in warm water, soaked in a weak solution of vinegar for a short time, then gave a final rinse, squeezed, and hung to dry. 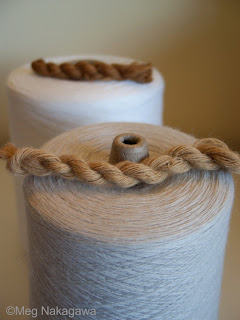 1/25 wool in natural and gray in Dye Lot 1.  I found it interesting that the gray yarn absorbed less brown, and ended up paler in color than the natural yarn; I expected the opposite. 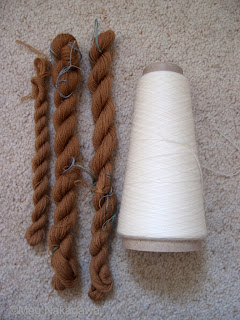 110/2 (2/17-ish) merino, from the left, Dye Lot 1, 2 and 3. The skeins feel slightly rougher than I had imagined, slightly more "raw" compared to how this yarn feels after a woven piece is wet-finished. 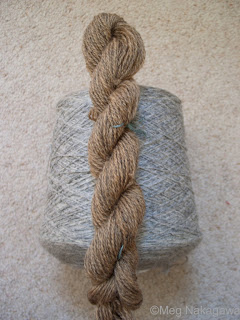 "100% natural wool, Shetland, gray" reads the label; 2-ply; Dye Lot 3. I don't know how long I've had this cone but the top and bottom of the cone is yellowing, the yarn is rough as an old potato sack, but it has lovely white/light-/mid-gray combination.  Dyed and rinsed, this is still rough, but contains interesting variations of values.  This yarn also had the nicest wet wool smell. 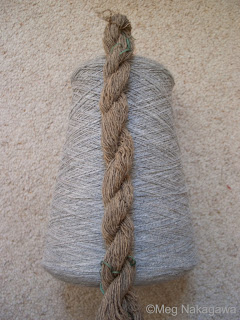 No label, wool, single ply; Dye Lot 3.  I never noticed the crimp in the cone until I dyed and rinsed, but Doh! 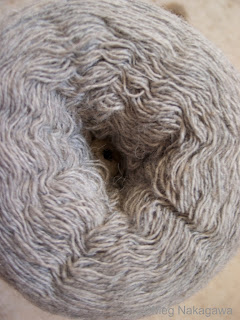 Does this mean it is, what's the word, highly twisted yarn? This skein has a slight sheen, with very pale and very dark areas.  It is also rough, but used wisely, I think it would be an interesting ingredient in an old-fashioned fabric. 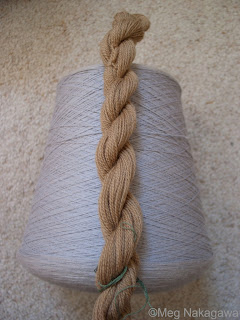 The most surprising of the lot: 2-ply wool slightly thicker than 110/2; Dye Lot 2.  Like the last two cones, I don't remember how I came into possession, but on the cone this is ugly, dirty and faded; the gray is a flat and nondescript, but dyed and rinsed, it became lovely and soft and gentle in texture and appearance.  While all other skeins have a reddish/grayish undertone, this one is slightly yellower.  Ever so slightly tougher than the merino, I think the yarn is suitable for a shawl or a baby blanket. 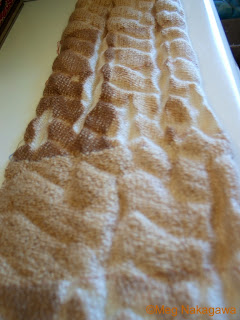 Oh, and an experimental Lahariya-esque swatch I prepared for Indigo Day I was too sick to go to. Unlike the skeins, I did a little bit of rigorous washing, and though I'm ho-hum about the dye pattern, I am a little intrigued by the bumps.

I had no end-use on my mind when I dyed these, but I thought of leaving these on my west-facing window sill to see how much they fade over time.  Then I thought of using these to embroider, so I have a distinct A- and B-sides to compare the fading.  I also have a cotton warp threaded on four shafts if I want to make a sample swatch. (There are about 10 different wefts used in the swatch so the sections reacted differently.)

The most surprising out of these experiments is how much the older yarns transformed in the process, in contrast to the newer, first two skinner yarns.  The older yarns definitely feel softer to varying degrees, and look "fulled", whereas the newer yarns' feel did not change so much, merino turning slightly softer and fulled.  Would I be correct in assuming the difference is a) because modern yarns need to be dry-cleanable and b) are closer to knitting yarns, in that they are more WYSIWYG and present no "rude" surprises after the first wash?  No wonder wet finish ceased to be as magical, in some instances, as it used to be.

My question remains the same: when I dye yarns to weave, I still don't know how to bring about optimal condition for wet-finishing.  My dyed and rinsed yarns look too fluffy and finished, even though I tried to keep the water temprature the same and avoided agitation; I'm worried my hand-dyed wool won't wet finish nicely in a woven piece.

Only one way to find out.

I got a lovely package from Sampling; it's my own umbrella cover.  What I love about this is it reminded me of Japanese family crests ("kamon").  Every family has a crest, but I don't know what mine is, neither my Dad's nor Ben's, though I know my mother's family's, (chrysanthemum of some sort.)

By the way, crests are dedyed from the black background, as well as embroidered, embossed, printed, etc.  I did not know this until relatively recently when I found artisans who specialize in dedying crests, (and they can also get out bad stains from kimono,) around where Ben's folks used to live.
Posted by Meg at 2/01/2011 08:58:00 PM