This and That and the Other 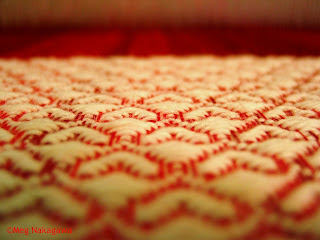 "The difference between art and craft could be... art decides on the concept first, while with craft, the technique is predetermined" I thought, mildly pleased I got started on the hearts blankets early this morning.  Then a couple of seconds passed, and I realized this is what art teachers have been telling me ever since I started asking two-plus years ago.

Another few shots of the hearts, and I wondered; did Michelangelo really consider mixed media of cloth and marble first, try it out, and later decided to go with marble only?  Because the concept-driven art education has been in vogue, but it wasn't always thus; traditional art education put a lot more emphasis on the expertise of technique and knowledge of material, from what I've read.  Apprenticeship was an important part, if not the only way.  So how does this knowledge benefit my conundrum/hysteria about the proposed group?

And then Shaft 2 ceased to lift.  It happened once yesterday, but rebooting the computer solved the problem then.  This morning, several rebooting, defragging, rechecking the hardware/connections didn't solve the problem, so I gave up.  Ben will have to have a look.

I threaded and sleyed the cashmere Log Cabin warp in two teals on the 4-shaft, but I didn't start weaving, because there is enough warp for 10 scarves, and if I had, I'll put the hearts on the back burner.  Again.

For those of you in the Northern Hemisphere, you may be enjoying the arrival of spring and flowers.  I think a lot about bright colors in the autumn as well as in spring, and I put it to the clarity of the air and sharpness of light this time of the year.  Colors really come to life and I've had my 20/2 mercirized cotton cones on the stairway for over a month now, and I keep coming up with saturated color combinations.  The warp I started making yesterday was fat stripes of two purples, two reds and two oranges separated by skinny light yellow-greens, and I'm not counting, so the stripes will come out in different widths.

While playing with that idea, I dared treaded on into the hitherto-forbidden red/pink and orange/pink territory; I used to hate these combinations, especially red/pink, but now I am attracted to the richness, the almost three-dimensional quality of these combinations. Blame it on the autumnal lights.  The days are getting shorter, though, and throughout the day the colors keep changing, making it difficult to learn about each pairing. 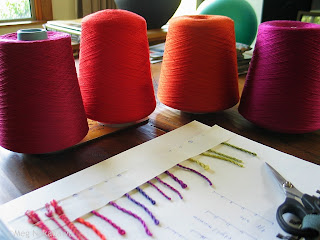 I'm still working on that biography of van Gogh, not a big book, but I'm reading slowly.  I'm taking solace and feeling alarmed by his peculiar personality. And I'm still not sure where the group thing is going, or where I'm going with that one.
Posted by Meg at 3/31/2011 05:54:00 PM